ON THE BANNING OF VEILS 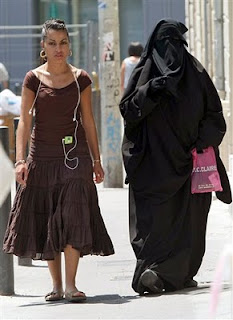 So veil-banning’s been in the news in Europe for a few years, and it was well past time I weighed in the matter from my distant vantage point in San Francisco, California. Here we don’t typically see women sloughing around in burqas and hijabs with a wary-eyed husband in tow, and when we do it’s something of a shock. Like the pre-9/11 feminists who were aggressively agitating for the United States to get rid of the Taliban in Afghanistan before George W. Bush and the neocons (tried to do) did just that, this whole burqa/hijab thing is one confusing muddle that unites strange sections of the left and the right, while tearing other sections of both asunder – when they’re even thinking about it at all.
Yet over in Europe, when Muslim populations have skyrocketed in the past decade and continue to grow, fear appears to reign across the spectrum. You’ve now got countries like France, Holland and Belgium that have been relatively homogenous for millennia, with shared (if evolving) religious and cultural values, now confronting an exploding minority that does not desire assimilation, nor acquiescence to cultural norms. And that freaks many tolerant, liberal-minded Europeans out. It’s how people of the left soon, on shifting accusational grounds of misogyny, anti-Semitism or sometimes even safety ("they might get in car accidents with those headscarves on"), soon become the intolerant ones. The result is a new plethora of hotly-debated laws that ban the wearing of head coverings or, allah forbid, the full-body covering burqa. Every time I read about a new law going up in Switzerland, France or Belgium along these lines, it’s a real head-scratcher. While I do not condone the recent anti-illegal immigrant laws passed in Arizona (I’m an open-the-borders kind of guy), it’s a total complete trifle compared to laws that keep law-abiding citizens from following their religion and customs.

It’s a cliché that’s probably a little bit offensive to bring up, but parts of Europe have been down this road before. The Belgians and the French and the Germans all have a duty to live out their ideals when faced with those in their midst who oppose those ideals – or they must ban immigration altogether. It’s really an either/or proposition to me. Muslims who come to a new country and who wish to follow Islam in their own manner, even if they cloak their women in these preposterous veils of shame, should in no way be restricted from doing so. The burden of a free society, and all that. This tinkering around the margins, where certain ancient customs and religions are said to be less-than-equal, is wrong-headed and flat-out discriminatory. I heartily applaud the nervous Europeans who oppose it, even while they keep an eye cocked on any real jihadis who may be in their midst.
Posted by Jay H. at 10:00 AM