WHO KILLED THE USFL? 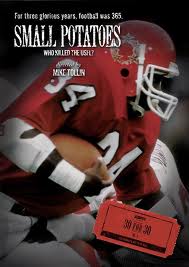 Maybe you’ve seen some of the heralded ESPN “30 For 30” sports documentaries from the past couple of years. I haven’t. Every time I try to grab one of them on Tivo, it’s always about auto racing or track & field or golf or something I’d rather slit my wrists than watch. I also keep forgetting that they’re being aired, so I miss all the good ones and learn about them well after everyone’s talked them to death online. In any event – ESPN has been making these high-quality documentaries from a variety of different directors for some time now; I now know what they’re capable of, because I went and bought “SMALL POTATOES: WHO KILLED THE USFL?” on iTunes and watched it the other night.


The USFL! Man, do I love defunct sports leagues, and those that tried in vain to compete with larger leagues & threatened their way of doing business. I am old enough to have seen sold-out NASL San Jose Earthquakes soccer games in the late 70s, and old enough to have gone to one 1983 Oakland Invaders USFL football game. Not only do I remember the Invaders winning, my dad and I still to this day routinely echo the drunken black man in the stands who heckled one of the Invaders’ wide receivers after he butterfingered a pass, “Maaaan, Stevie Wonder could have caught that ball!”.  The ESPN documentary presents a concise, 1-hour history of this upstart league and how it presented a real challenge to the NFL for a couple of years there. They came out of the gate strong by signing star Georgia running back Herschel Walker out of college, and by adding ESPN exec Chet Simmons as their commissioner. Early on, the league actually was a big hit, playing its games during the NFL’s off-season and securing national TV deals with ABC and ESPN; certain teams caught on like wildfire in their hometowns, selling out big stadiums even during that first year.
The USFL continued to grab Heisman Trophy winners and other underclassman college stars right out of college – Steve Young, Mike Rozier, Doug Flutie, Jim Kelly - and paid them astronomical sums. All the early success went to many in the league’s heads – including New Jersey Generals owner (get ready for it!) Donald Trump. Everyone hates Trump, of course. This documentary unconvincingly sets him up as the fall guy for the entire league, because he brazenly pushed an idea to have the league play during the same season as the NFL, and to sue the NFL for antitrust violations as well. Yet by that time, teams were contracting like crazy. The novelty wore off quickly, and it was still obvious that the NFL was putting the better product onto the field every week, no matter how many anomalous Fluties the USFL was able to grab out of college. As failing sports leagues typically do, this one died fairly quietly and unmourned.
The documentary is a fun look at just what high, albeit unrealistic, hopes everyone had early on as this concept was exceeding expectations, and how many of the USFL’s on-field innovations (especially run-and-gun offenses) made it into the NFL very quickly. If all the 30 For 30s are this good, I’ll just Season Pass all of ‘em. Even the golf crap.
Posted by Jay H. at 7:00 AM