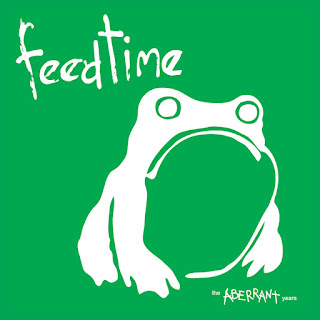 The four CDs that make up this new compleat box set from Australia’s feedtime cover the band’s career from 1985-1989, which just happened to be the same four years I was attending college, and was totally immersed in this band and their brethren from down under. Around 1986 and continuing for a couple of years, my friends and I were buying 45s and LPs from all manner of ugly, noisy and thrashy bands out of Australia, heading down to Los Angeles to buy the new singles etc. on Au-Go-Go, Waterfront, Aberrant, Black Eye and other labels of the time. My tastes at the time ranged from the Birdman/MC5 punk stuff a la The Celibate Rifles and New Christs to the weirder, darker mystical stuff on the “Waste Sausage” and “Leather Donut” compilations – none of which I can even listen to anymore.

feedtime – the lowercase is intentional - figured pretty big in my 1980s world. Not a big stretch to say that their music has generally stood the test of time far better than that of their skronky and wacked-out peers of the day. feedtime had a low-end, bass-heavy, propulsive, machine-like sound wholly unique and unprecedented at the time, and at their best it sounded like they were creating something completely fresh and mysterious, all the while destroying multiple eardrums along the way. I don’t remember any interviews, any liner notes, and certainly no U.S. tours, when this three-piece band from way across the pond blasted out a new album (there were four in all), it was generally well-received across the board.

“Shovel” from 1987 is the first one I heard, and I loved it and played it to death on my radio show. “Cooper S” came not too long after that in ‘88 – a covers record in which each song by the Stones, Nancy Sinatra etc. was basically ripped gut-from-bone and channeled into the band’s chisel-sharp attack – a sound rooted in punk but also in that Australia-only aural murk that gave birth to similar-minded (but far slower-tempo’ed) bands like Lubricated Goat and King Snake Roost. Somewhere in there I found an Aberrant Records compilation called “Why March When You Can Riot?!?” that had two stellar feedtime songs on it from 1985, “Small Talk” and “Don’t Tell Me”, the latter of which is probably the best thing they ever wrote – a slicing, chilling piece of guitar-n-bass workmanship with staccato drums, somewhere between postpunk and hardcore and their own mid-80s Aussie something-or-other.

Totally forgot as well until I bought this 4-CD set on Sub Pop just how great their cover of The Beach Boys’ “Fun Fun Fun” was, or what their excellent 1989 college radio “hit” (I know I played it repeatedly) “Motorbike Girl” even sounded like. That’s because for all the great things about feedtime, they were rarely consistent, and their albums were generally a chore to get all the through. 40 minutes of peaks and valleys, with the valleys frequently being a noisy, thudding bore. They employed two singers, and the main one (the bass player, I believe) had a voice not unlike that of a burly, drunken black bear. In 1987 I was willing to forgive all manner of transgressions, but then again, I was also 19. I went to last year’s first feedtime west coast “reunion” show in San Francisco, and despite the contradictory testimonials of many in attendance, I marked it as probably the worst reunion gig I’d ever been too – out of synch, out of tune, poorly-mixed, and sloppy as hell. Since fEEDTIME on record were tighter than a bee’s intestinal tract, seeing them totally fall apart live had me heading for the exits well before mid-set.

Hey, you win some and lose some in the reunion gig game. I bought “THE ABERRANT YEARS” to get some of their classic stuff back into my collection, after eBaying off the LPs in a fit of pique and a need of money around a decade ago. I’m not sure when CDs dropped so much in price, but this thing was a mere $18.98 – for a box set – at my local store, brand new. That’s surely worth it not merely for the songs I’m posting here, but for the other dozen or so great ones they churned out in their day.