"AIMER ET PERDE – TO LOVE AND TO LOSE" 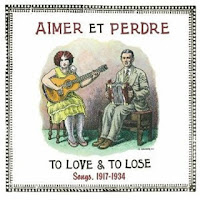 I'll blame two prime culprits for springing me back into deep, revenant listening to obscure and ancient world music the past several months. The first is a radio show on San Francisco's Radio Valencia called GRAMOPHONY BALONEY, hosted by an affable Irishman known as "D.J. McSchmormac". I stumbled upon the show almost by accident, and have been transfixed over recent weeks by his slavish devotion to weird and yes, otherworldly, pre-1951 sounds from around the globe

The other culprit is this 2xCD on the Tompkins Square label called "AIMER ET PERDE – TO LOVE AND TO LOSE SONGS, 1917-1934". I first heard tracks from this on the Gramophony Baloney radio show/podcast, and sent away a few sawbucks immediately in order to procure a copy. In theory, the songs are about love and loss, as you might expect them to be from the title. Given that at least a third of those songs are instrumentals, it's sort of a dubious proposition – but we'll pretend that the more upbeat instrumentals are about love, and the mournful ones are songs of loss.

It's a terrific collection – 36 tracks from regions hither and yon, and all from pre-WWII 78s compiled by master world music curator Christopher King from his extensive collection. I'm most partial to the Ukrainian and Eastern European stuff, like a wild call & response, multi-layered, 2-part party song called "Ukrainske Wasilla w Ameryci", translated as "Ukrainian Wedding in America", and performed by Orchestra Pawla Humeniuka. I'm posting the first of the 2 parts for you to listen to here. Yet once you leave the realm of the Ukrainian village or immigrant tenement, you're soon transported to the Louisiana bayou and Cajun Country, or to Poland. There's also two or three heavy hitters from the world of deep south blues and country; a terrific Carter Family song from a little late in their career called "I Never Will Marry"; the amazing Dock Boggs; and the gravel-voiced bluesman Richard "Rabbit" Brown and "Never Let The Same Bee The Stung You, Sting You Twice".

Different people will experience the genre- and geography-skipping differently. After my first listen, it was easy to take it all in stride. The track selection is so high-quality, and the sound so perfectly scratched and distant and out of time, that genre and regional differences vanish pretty quickly. It comes with a 60-page book of liner notes as well, and some of the best colorful "recycled cardboard" package design I've seen in a while, including some cool R. Crumb drawings of the musicians. Who cares if it ain't 100% about lovin' and losin', right?