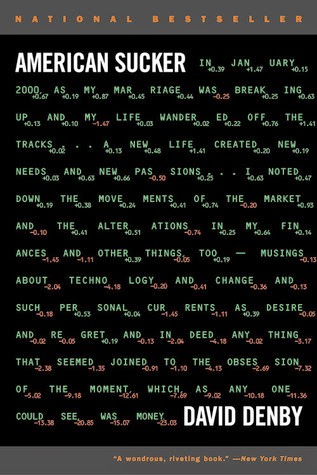 I pulled this unread hardcover book from 2003, bought on remainder maybe ten years ago, out of my garage stash of unread books and read all 300+ pages in two sittings. David Denby is to this day the film critic at the New Yorker, and his autobiographical account of his (and our) stock market mania during the late 90s/early 00s dotcom boom ended up being far better than I anticipated. There’s probably a reason I’m so drawn to books about capitalism gone mad; I’ll snap up books about Enron and Bernie Madoff and suckers and liars of all eras, maybe because I work in business and constantly guard against falling in with the hucksters and the creeps.

Denby, a man of “the arts”, came into his obsession with the market after his wife left him, right as internet-bubble stock prices were going through the roof. As a means to buy out his wife’s portion of their Manhattan residence during the divorce, he hatches a plan to make $1 million on technology stocks during the year 2000, which, given the irrational exuberance of the day, really wasn’t as hare-brained as it sounds today. That’s around the time I started actively buying stocks as well, and though I’m exceptionally risk-averse and did nothing to truly harm the tiny, tiny amount of money I had, I bought into a lot of smoke & mirrors as well (“Dow 30,000”; “a new economy”, “Lucent Technologies” and so on).

His account of his inner struggles as he times the market badly are quite recognizable, and he layers on much of the same universal soul-searching that anyone does when they try to make sense of the market. I don’t mean the market writ large; the timeless fundamentals of supply and demand, and of specialization and trade, are sound and in no need of any admonishment. I mean Wall Street. "AMERICAN SUCKER", and the others I’ve read on this topic during recent years, have me eminently distrustful and skeptical of much of the entire infrastructure of Wall Street: the analysts, the brokerage houses, the trading mechanisms, the ratings agencies, the consultants and so on. Denby does an admirable job trying to deconstruct greed – his own, and that of man in general. I’m not sure he truly hits upon its good and its reprehensible qualities in a way that sent lightbulbs popping above me, but I admire his effort in trying.

He befriends and follows two characters recognizable from that gilded era: the Merrill Lynch analyst Henry Blodgett, who famously touted internet stocks during their rise up and even as they were crashing (and was later prosecuted for his role in maintaining “buy” ratings on stocks in order to bring more underwriting business from these same companies to Merrill), and Sam Waksal, the ImClone CEO with the promising cancer drug who was prosecuted for insider trading and other crimes, bringing his friend Martha Stewart down with him. Denby describes the captivating hold these charlatans had on him, and we’re lucky he chose to pursue strong access to these two important players in the Wall Street psychodrama long before their dastardly deeds were revealed.

What makes it all such a ripping yarn is its universality. These feelings of envy and greed are part of the human condition, and they can be exacerbated by life events like divorce – or by a constant party of wealth accumulation going on around you. The evenhanded writing qualities I’ve admired in Denby’s reviews of film are on display here, and while he’s hardest on himself, he also understands that even he is mere flesh and blood, and that it truly takes real mental and emotional work to transcend our many inborn weaknesses.
Posted by Jay H. at 4:51 PM