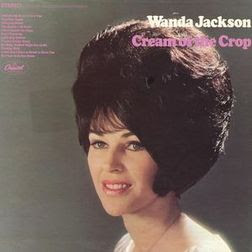 Most guys I know, if they’ll cop to enjoying country music at all, it’s usually the most rough-hewn “outlaw” country of the late 60s and early 70s, as exemplified by WAYLON JENNINGS and JOHNNY PAYCHECK. It might sometimes stray into slightly more commercial country like WILLIE NELSON or GEORGE JONES, or to acts with a bit of quirk like PORTER WAGGONER. Everyone loves Hank Williams, and most everyone digs Johnny Cash. Women that I know seem to hate country music with a vengeance, except for the lunatic fringe who believe that Kenny Chesney, Rascal Flatts et al represent aynthing more than a tangential, Southern-accent connection to the country music of yore. I think we can ALL agree that country music in its best forms died around 1975 or 1976, with the arrival of Kenny Rogers, Eddie Rabbit and the Oak Ridge Boys, and the godawful crossover of country with dance music and rock. Country since that time certainly has had acts that have made good records, but to my ears those have primarily come from the modern “No Depression” sect of bands or acts who took their cues from the 50s, 60s and early 70s, or who’ve gone in a more folkie direction a la TOWNES VAN ZANDT.
This is all my way of saying that while many of us have universalist standards for what is or isn’t good country music, when we like the form at all, some of us – say, for instance, me – allow ourselves to indulge in different sub-fringes of classic country music and call it “the best”. In my case, I am a total sucker for strings, backing vocals and the slicked-up “countrypolitan” studio sound that many of the top female artists of the 60s employed. For me, LORETTA LYNN’s version of “Hello Darlin’” is probably the greatest country music song of all time, notwithstanding Hank Williams’ entire oevre. A song like WANDA JACKSON’s melancholic “Back Then”, rather than striking me as purely syrupy schmaltz, comes off to me as a syrupy, schmaltzy, beautiful tearjerker that I could listen to 100 times in a row. I’ve read enough books on 1960s country to know that this was the era when the songwriters really took over, and men like Harlan Howard, Shel Silverstein and Tom T. Hall wrote dozens of well-crafted hits during this time and duly have their place in the Country Music Hall of Fame as a result.

I’m also a fan of some of the drunken hellraisers (check out the awesome Johnny Paycheck and Merle Haggard songs I've got for ya), trucker music (Dave Dudley!), some of the more offbeat male singers (JIM ED BROWN is a particular favorite) and some of the less-countrypolitan women like Jerry Lee Lewis’ little sister LINDA GAIL LEWIS. Here’s a collection I put together of 17 of the best country songs, all from the time I think country music was peaking in roughly 1965-1975. It's perfect for dragging into iTunes, as everything is saved in the .m4a format.

Let me know if I missed any knockouts, and hope you enjoy.

Another way to get this one is to download each track individually - they're all labeled and easy to import. Thanks to Jeremy Nobody for this labor of love. CLICK HERE to do it this way.
Posted by Jay H. at 5:00 AM