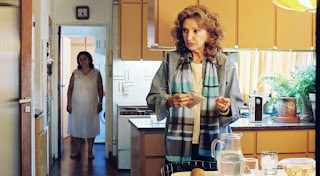 Having been paying Netflix customers since their earliest days, my wife and I have built up a pretty awe-inspiring queue over the past decade. We watch a lot of film, and yet I just got around to seeing the 2004 Argentinian film "LIVE-IN MAID", which I probably plopped into the queue around 2005 or 2006, when it was clear I wasn't going to have time to catch it during its two-week run in San Francisco. And that was back when foreign films actually played in theaters. What the hell happened in the intervening seven years? When a French, Danish, Chinese, what have you film of renown comes into theaters at all, it's usually in New York and Los Angeles only - and when it comes here or to other big cities, it's usually festivals and extremely limited runs, and that's it. Granted, there are plenty of ways to see these films in time - like, say, Netflix - but the ecosystem of reviews, critical discussion, recommendations from friends and so on for foreign films seems to have up & nearly vanished.

I'm vexed because even though it took me 8 years after its release to see "LIVE-IN MAID", it's the sort of drama that shines a searing floodlight on its host country's unique historical situation and mannerisms, and thus something I'd have maybe liked to see a little closer to its release date. In this case, it was the Argentinian economic crisis of the early part of last decade, and the vast differences between rich and poor in its major city, Buenos Aires. Remember the runs on the bank, and the devaluation of their currency? They were in some pretty Greek-like trouble there for a while, and this film illustrates when happens when the rich are no longer so, and have to uncomfortably adjust to a new interpersonal reality vis-a-vis their domestic helpers.

"Dora" is the titular live-in maid; Beba is her marginally kind but scattered and distant divorcee overlord. Dora lives in a closet, essentially, in the back of the plush apartment - which ironically doesn't appear large enough to have merited a live-in maid or a maid of any kind. The back story on the relationship between these two women is revealed, somewhat, as the slow drama unfolds. Dora has worked for Beba and her family for over 30 years. When Beba basically runs out of money, her upper-class world sinks quickly and precipitously close to the reality that Dora has been living in her entire life. We don't hear much about the larger crisis in Argentina at the time, but just a few hints in the film and a faint whiff of historical knowledge on your part, and you know that this is a subtle but broad statement of what life might have been like for the Bebas and Doras of the world during that time.

I found "LIVE-IN MAID" fantastic. When it could have gone overboard with theatrics, it instead cut away to a new scene, leaving you with enough dread and loathing to keep you on your toes. The dialog was raw and real, though leavened with humor and humanity. Director Jorge Gaggero has only made this one feature film (why?), and he really made it count. He made a film about class without making it about class warfare, and a film about coping in tough times without loading on the pathos. Hedonist Jive thinks you should definitely check it out.
Posted by Jay H. at 9:46 PM