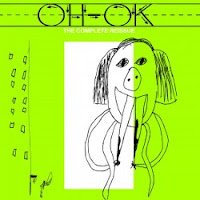 I used to think that all of the non-hardcore music emanating from Athens, Georgia and the south in general in the early 80s was a variation on “jangle”, which is what we called the music of R.E.M., LET’S ACTIVE and their college rock ilk. I therefore found it easy to ignore PYLON, whose records I saw in bins all the time and found out later – way later - were a great post-punk art/dance group, and OH-OK, whom I condescendingly assumed back then to be a female-fronted R.E.M., given that they were sometimes helmed by Linda Stipe – Mike’s sister. Leave it to our pal Erika Elizabeth to right this wrong three decades later and introduce me to the outstanding childlike new-wavy pop art of the band and their recent collection “THE COMPLETE REISSUE” on Happy Happy Birthday To Me Records. Erika plays this thing almost every week on her show, and after a couple spins it totally sank in and I bought it. It’s great.


I know my tolerance for twee has increased dramatically this past decade, but this isn’t even that “twee” – it’s just a load of fun, with short pinpricks of wavoid bounce, weird chord patterns and off-beat fake harmonizing. Even the live stuff they threw on here is a blast – “Jumping” and “Here We Go” had me imagining 100 new waver haircuts pogoing their asses off at some sweaty college town bar. A guy we’ve both heard of, Matthew Sweet, was the guitarist in this band – I know he had a solo career of some renown after this; I just haven’t heard his stuff (see how easy it is for me to freeze out musical acts for years based on wrongheaded assumptions?). OH-OK were around from 1981 to 1984, and yes, this is their complete recordings. The early stuff is the more happy-go-lucky; the later stuff stretches out a bit to lengths greater than two minutes (!) and has a more melancholy feel along with gentle hooks aplenty. Try this track “Such n Such” that I’ve posted for you here and try to get up offa that thang whilst doing so.