BOOK REVIEW: "ALL THE DEVILS ARE HERE" by Bethany McLean and Joe Nocera 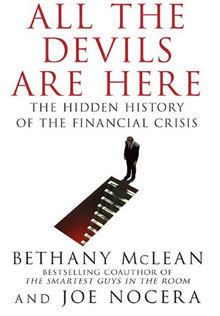 My 2010/2011 quote-unquote intellectual project has been to try and get a handle on the financial crisis that peaked in 2008, and that we're all still living through the malaise-ridden effects of today - worldwide. This latest boom and bust resists easy political gamesmanship, much as I'd like to explain the entire thing away with a set of withering libertarian asides. In the early days after TARP, it seemed pretty easy to alternately pin the blame on Fannie Mae & Freddie Mac (heretofore known as the GSEs, or government-sponsored entities, or perhaps "the evil GSEs") or on "Wall Street" as a whole, who abdicated their traditional role as "allocators of capital to productive enterprise" in a bizarre ponzi scheme hocking derivatives made from subprime mortgage-backed securities. But I was pretty certain that either explanation was too simplistic of a read, so I pressed onward.

The crisis also has given me my first real sense of dread & foreboding since the Cold War; the sense that due to the interconnectedness of markets and the frailties of humanity, a few wrong moves and boneheaded decisions, and all of a sudden the ATM's don't work, your bank account empties and all the food runs out, for good. At least that's the place I go in my dark hours; thankfully a sense of reason typically prevails. I'm the guy that recommended THE RATIONAL OPTIMIST in these pages a few months ago, after all. Yet this crisis really exposed a lot of bad, bad stuff, and I absolutely needed to read this book because I was certain that Bethany McLean, co-author of the amazing Enron chronicle "THE SMARTEST GUYS IN THE ROOM", was going to do a superlative job lining the bad guys up in a row and mercilessly pecking them apart. As it turns out, that's exactly what she and co-author Joe Nocera did in late 2010's "ALL THE DEVILS ARE HERE", and in the process maintained a sense of evenhandedness even while eviscerating all comers. That's not something that's easy to do over 380 pages.

The toxic relationship between Wall Street, the US government and the housing market was building for years. McLean and Nocera start the story in the 1980s, after the Wall Street scandals of that era, and posit that the invention of the derivatives market during this time compounded with multiple other factors to slowly set the snowball in motion. I’ll list the biggest suspects in a second, but perhaps you might want to know what a derivative is, if you don’t already – especially as it applies to mortgages. Rather than me paying a lender x amount of dollars, with interest, to buy a house - a derivative, or mortgage-backed security, allows that lender to sell off the loan to someone else who then takes control of the mortgage. It gets way more complex, however. That mortgage/loan is then packaged with a bunch of other loans into a financial product that can be rated, bought and sold – so maybe there are now 1,000 mortgages in there, all of them held by rock-solid upstanding citizens like me and you, rated AAA by the "faultless, peerless" ratings agencies like Moody’s and S&P. Maybe that sells to someone for $500 a “share”, and if all the mortgages get paid back in time, maybe it nets the buyer $550 at the end of the day for a little profit. If it’s full of risky mortgages, however, then the fun begins. The “upside” is high – instead of being able to make $550, maybe you can potentially make $2,000 or far more – but you can also lose it all if the home-buyers foreclose and stop paying.

See how this works? Now think of a grotesque hall of mirrors, where these derivatives are combined and mixed up with each other, ad infinitum, and made into wholly new products that can be sold for profit. You very quickly start losing the thread of exactly why this is an important activity for Wall Street to engage in. There were billions of dollars to be made trading these things back and forth between firms on Wall Street, and at the end of the day, that’s why they did it. So here’s my informed roll call of bogeymen in this whole mess, all of whom/which are meticulously detailed and shellacked in “ALL THE DEVILS ARE HERE”:

1. The subprime mortgage industry. These were companies like Ameriquest and Countrywide, who raked in huge fees by basically writing a mortgage to anyone with a pulse. The book details their rise and their roots in the 1980s, and how formerly rock-solid business minds like Angelo Mozilo of Countrywide bit the wrong side of the apple and decided to keep up with these new fly-by-night lenders. Business principles flew out the window as loans for $300,000 houses were written to people with no money, no documentation, no jobs and no prospect of ever paying their loans back. I put these guys first because their actions were the most egregious of all - but it was very hard to pick a #1 baddie.

2. Big banks like Bear Stearns, AIG, Goldman Sachs and Merrill Lynch. These are the people who bought up or sold the subprime loans, repackaged them into crazy derivatives, and congratulated themselves for how smart they were for doing so. Then when it all came tumbling down due to their stupidity, they took massive handouts from the US taxpayer instead of being allowed to fail for their short-sightedness.

3. Government’s “good intentions”. The US government let loose Fannie Mae & Freddie Mac and gave them their implicit backing, then encouraged them to write as many loans as possible to expand the housing market to the “underserved”, never mind whether the underserved had money or not. The GSEs were essentially pushed into this market by the Clinton administration, and when times were good, allowed their good fortune to relax their standards so much that they had to be bailed out (again, by you and me) to the tune of billions of dollars.

4. The Evil GSEs – Fannie Mae & Freddie Mac. Your stomach will turn when you read about the gamesmanship played on Capitol Hill by the GSEs in order to preserve their favored status and “implicit guarantee” – the payoffs, the lobbying, the threatening, and the wholesale squandering of taxpayer dollars. Their wanton aggressiveness in turn prodded Wall Street to take greater risks to try and overcome the GSEs’ favored status, which of course led to a very public and very devastating race to the bottom.

5. Wall Street’s culture of quarterly earnings expectations. This doesn’t get talked about much, but I think it should. Publicly-traded companies like Goldman Sachs, Ameriquest and Merrill Lynch live(d) and die(d) by the share prices, which are unfortunately determined by quarterly earnings reports. The Street is very short-sighted and fickle, and tends to not take the long view. If you’re the CEO of one of these companies, it’s a “you get what you measure” sort of deal. If the Street doesn’t value thrift, saving and caution, and instead rewards your company for boffo numbers at the end of each quarter, you’re probably going to do what it takes to deliver those numbers, rather than prudently stand back and listen to first principles. Quite a few CEOs who put all their efforts into “meeting the numbers” instead of building strong companies are now ex-CEOs. The rub is, had they been more prudent and wise in 2000-2008, they likely would have been ex-CEOs far earlier.

6. The ratings agencies. The clowns running Moody’s, S&P and Fitch were excoriated in “THE BIG SHORT”, which I reviewed here, but it’s worth bringing them up again. While barely understanding what they were actually rating, they’d slap the vaunted “AAA” rating on some of these mortgage-backed securities and give cover to the banks to trade more of them. “AAA” wasn’t worth the paper it was printed on. Thousands upon thousands of these rated securities were absolute garbage, full of subprime loans that no one would ever pay back, and that the real smart people (again – see “THE BIG SHORT”) were sounding the alarm about long before the time bomb exploded.

7. Faulty regulation. I’m open to radical suggestions for how this market should be regulated, with the caveat that the government will almost certainly screw it up, as they always do. My gut tells me that no-documentation loans should be outlawed, and that anyone who writes a loan without a certain verifiable set of paperwork should be punished for doing so. I’m even open to discussing requiring minimum down payments; banning adjustable-rate mortgages; requiring disclosures to buyers in plain, simple, non-legalese English; and some greater oversight of the ratings agencies (or better still, abolishing them altogether, since they proved themselves completely useless). I’m not in favor of punishing “fat cat bankers” for their big bonuses. That ship has sailed, and you can't retroactively punish a private enterprise if they're not engaging in unlawful behavior. Instead, I’d like to see the government get the hell out of the housing market in totality, and return it to lenders & borrowers with a (very small) set of common-sense rules guiding the transactions.

8. Bubble mania and human frailty. Finally, the perpetual, optimistic notion of “this time it’s different” that plagues human behavior is as much to blame as anything else. We, the people, just wanted houses that doubled in value in two years. Of course we did. We wanted to borrow against the rising values of our homes, in order to fund college educations, new boats and the like. It worked for quite a few years, which fed the mania. At the end of the day, I’m afraid, this is just how we are wired – and that includes the bankers on Wall Street. Everyone wants the easy shortcut to riches, and we all have a mental block that prevents us from seeing the worst-case scenario, even if that scenario is rationally present and is more likely to occur than not.

That’s my take on the whole mess, anyway. It has colored my thinking about how money is actually made in America, how value is actually delivered to consumers, and how government and banks have it in them to rig the rules in concert with each other to ensure the expansion and bloat of both. “ALL THE DEVILS ARE HERE” may not be quite the masterpiece “THE SMARTEST GUYS IN THE ROOM” was, but I guarantee you you’ll be even more disgusted at this sad tale than you were at the loathsome Enron guys after reading the latter.