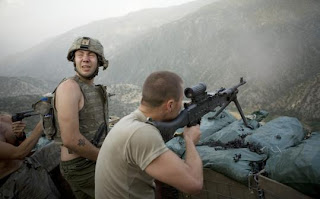 I passed this superb documentary by when it hit the theaters for about five minutes during the Summer, and only really gave it another thought when it was beknighted with one of the three Best Documentary slots at the recent Academy Awards. I'm glad I was alerted to it again, because now that I've ingested it through the magic of "Netflix Instant", it's a must-watch glimpse into a platoon of American soldiers stationed in the baddest of the badlands in Afghanistan's Korengal Valley. These guys are basically tasked with the unforgiving job of taking this territory from the Taliban inch by inch, surrounded on all sides, while simultaneously working to build trust and credibility with tribal leaders who distrust them and mostly want them to go away.

The mental backdrop from which I watched it was one of opposition to the endless, ill-defined, nearly 10-years-old war in Afghanistan (!!), but "RESTREPO"'s compass is set squarely in the middle simply by letting the cameras roll. You'll walk away from the film both immensely proud of the selfless, immensely courageous (very) young men sent out to do battle every morning in the name of American ideals, while also sickened by the mindlessness of it all and the outrageous suffering visited upon the locals and the soldiers. A military person would tell you that "that's what war is", and they're right. I'm currently reading Victor Davis Hanson's collection of essays on war, "THE FATHER OF US ALL: WAR AND HISTORY, ANCIENT & MODERN" in an attempt to get around the contradictions of war - its timeless persistance, its imprintation upon our DNA, and yet the revulsion we feel when it's brought up close to us. That hasn't happened much with this particular war in Afghanistan - it's been an easy one to ignore for the past nine years, am I right? Meanwhile, when these guys take a new hill and name it after their fallen comrade (Juan "Doc" Restrepo), they deservedly celebrate, hoot & holler because they've cheated death and moved another 100 meters toward their objective, such that it is. "RESTREPO" does an outstanding job giving you a feeling of what it must be like to live through a war while being ever-aware of your ability to die in one.
Posted by Jay H. at 7:56 PM