A PALATE-EXPANDER FROM O’DELL BREWING 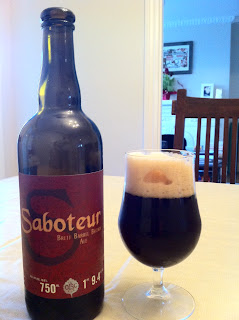 My last trip to Kansas for work featured my usual beer run to the gargantuan liquor superstore in Overland Park whose name escapes me – you know the one, the one over by the mall. I had with me a list of 2 beers I needed to find in 22-ounce bottles, beers I’d read about online from upstanding Midwestern bloggers and vloggers like THE HOPRY and their ilk. The crumpled, pulled-from-my-wallet list had scrawled, desperate-looking handwriting that said in tiny letters, “Boulevard Smokestack Series Bourbon Barrel Quad” and O’DELL SABOTEUR. My mission was accomplished at 10 in the morning. Nothing like walking out of a liquor store among the daytime drunks with a big paper sack full of alcohol in your hands, as the watchful, judging eyes of Kansas burn deeply into your soul
Careful readers will know that we were immensely pleased with the BOULEVARD BOURBON-BARREL QUAD, and reviewed it with gusto (if briefly) right here. Let’s make that a big two for two and then some with O’DELL SABOTEUR, which I had the other night. It immediately made me want to hop of the first Southwest flight to MCI or DEN so I could grab some more, if it’s even still around. SABOTEUR, from Fort Collins, Colorado’s O’DELL BREWING, was made over a year ago and is sadly a limited release. It’s an alliterative “Brett Barrel Brown Ale”, and that really might say it all: exposed to and soured by wild yeasts, aged in barrels, and at its core really an imperial brown ale with so much going on I don’t even know where to start. Smoothness – let’s start with how smooooth it is. It’ll pucker your palate something good, but only slightly. You get used to it quickly, leaving much more time to appreciate the rich dark fruits that explode all over the mouth – plums, figs, dried fruit – even a little pineapple. It’s dry and warm and it’s a total marvel of a beer. Put it on your beer bucket list because you’re going to want to try and get one of these into ya before you expire. 9.5/10.
Posted by Jay H. at 6:00 AM