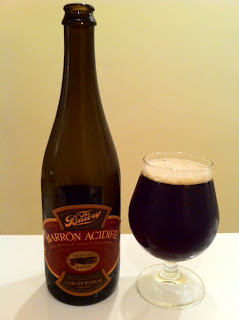 OMG I could just die if I don’t get at least one blog post in a week here. I’m busy, but you people have a right to be entertained. So let me tell you about a beer I had last week. It’s called “MARON ACIDIFIE” and it’s one of those beers that you plunk your shekels down for now, and ask questions later. I paid too much money for it, but what are you going to do. I mean it’s THE BRUERY for godsakes, the Orange County magicians of barrel-aged beermaking, collaborating with Tampa, Florida’s CIGAR CITY, that hot upstart barrel-aging superstar of the tropics – whose brewmaster, incidentally, is named Wayne Wambles. Awesome name. Put that in your pipe and smoke it.


MARON ACIDIFIE is a wonderfully rich sour ale, and is barrel-aged as you might have expected. I probably could have thrown some years on this thing before drinking it, but I’m an impulsive, impatient baby. It tastes of grapefruit and unripe plum at times, but still has a delicious sweetness that easily overcomes the puckering sourness. Low carbonation and a nice thick mouthfeel. For such a monster from two monster brewers, it’s quite approachable. On a difficulty scale, with some of the Russian River Brewing sours at the top of the chart and, I don’t know, Michelob Light at the bottom, I’d put this around a 6. As far as the Hedonist Jive scoreboard goes, let’s assign this one an out-of-this-world 9/10 and hope these guys have a long, fruitful sour beer partnership in years to come.
Posted by Jay H. at 7:00 AM