“CALIFIA – THE SONGS OF LEE HAZLEWOOD” 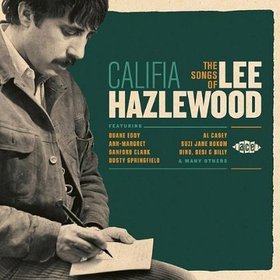 The LEE HAZLEWOOD bender continues. I bought this CD collection of songs that Hazlewood wrote and/or produced – usually both – in the 1960s and 70s, and am now a better man for it. His psychedelic cowboy weirdness is all over this collection of disparate songs and genres, even when it’s R&B, rockabilly or blues. Something about the way Lee Hazlewood turned a phrase about hippies, rebels or even housewives was unique to history; the man was a true bard of the 60s. He often created a lush, strings and horns-laden sound that also defines the musical 60s for me. That sort of orchestral cheesiness was rarely heard again, but placed in its context, it sounds wonderful.

“CALIFIA – THE SONGS OF LEE HAZLEWOOD” does a lot of genre-hopping and can be as sparse as a Duane Eddy twanger or as rich and soaring as a duet with Nancy Sinatra (the awesome “Ladybird”, which opens this collection). Though Hazlewood produced and arranged a ton of instrumentals during the 60s, every track included here features vocals. I’m partial to the work he did with female singers – Mr. Hazlewood was a notorious lover of women – and so the standouts for me are heard and previously-unheard tracks like “Sweet Ride” by DUSTY SPRINGFIELD and “Need All The Help I Can Get” by the Swedish chanteuse with the nom de plume of SUZI JANE HOKOM. (I wish they had included Hokom’s version of “Home (I’m Home), which was the B-side of her 45, and which CRUD CRUD blog posted a couple months ago). It’s ANN-MARGRET’s crazed “You Turned My Head Around” that you’ve simply gotta hear, which is why I’m posting it for you below. As in “Bye Bye Birdie”, famously satirized during Season 2 of “MAD MEN”, she can barely sing and gets away with it beautifully – and even more so on this one, which features grinding fuzz guitar noise swirling all around her, as well as bells, strings, chimes and general chaos. Brilliant!


Another big winner was from a project the liner notes say Hazlewood really suffered through – DINO, DESI & BILLY’s “The Rebel Kind”. These were Dean Martin & Desi Arnez’ kids (and their pal Billy), and they were studio prima donnas who happened to cut a fantastic teen-fuzz pop anthem under Hazlewood’s steady hand. I’m posting it for you here. Like I said, there are also some R&B and girl-group knockouts, including three from DARLENE LOVE spinoff bands and a scorcher I’ve heard before by THE SHARPS called “Have Love, Will Travel” (not the Sonics song). This compilation exceeded some pretty high expectations and is another one to put on that Lee Hazlewood tribute mantle you’ve been building.


Play Ann-Margret, "You Turned My Head Around"