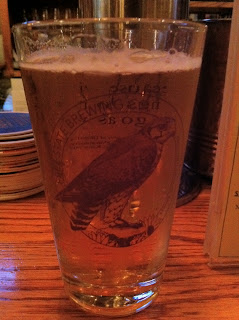 When I'm out there on the road, workin' and bringin' home a paycheck, I tend to make the centerpiece of every trip a visit to the area's most heralded brewery. I've made many such trips to Kansas City, Missouri/Kansas, yet I've never set foot in BOULEVARD BREWING - mostly because they don't really have a brewpub and a place to sit & sample the way others do. They have tours, but they're during the day - and as I might have mentioned, during the day, I'm workin'. So I've settled with buying their rare 22-ounce seasonal ales, as well as those from locals or nearby breweries SCHLAFLY, ODELL and GREAT DIVIDE, and stashed them in my suitcase where there's room.

This time I knew as well that I wasn't going to go to Boulevard, but what about this FREE STATE BREWING I've heard about in Lawrence? Why, back in 1993, when I was the "road manager" for CLAW HAMMER on their '93 North American tour, "we" played in Lawrence in an out-of-the-way dive called The Outhouse, and the whole evening was fantastic. The locals were great, the town was clean, funky & interesting, and hey, I guess I just wanted to go back. So this past Friday night I drove out there from Overland Park, Kansas, where I was staying, and painted the proverbial town in Lawrence. FREE STATE BREWING was my destination, and Free State Brewing was where I arrived.

I'll get this out of the way so we can move on and never speak of it again: this might surprise you a bit - it sure did me - but when you're in Lawrence, Kansas, you probably shouldn't order Mexican food. There aren't, like, any Mexicans for one. The black bean and cheese quesadilla I ate at Free State was one of the unquestionably worst meals I've had in some time, and I satisfied myself with the beer and the Canucks game on TV and tried to not think about eating again for some time. Atmosphere was lively and fun, and service was first rate. Just your basic well-run college town brewpub with bad good and great beer. Oh, the beer? Yes, let's talk about that:

FREE STATE - "LEMONGRASS RYE" - Now here's a curveball of a summer ale - a lemony ale liberally dosed with rye, low in alcohol and easy to drink. Bravo. Very light and citrus-fruity with a nice tang. Hops are  faint, lemon is not. Summery. And it's summer. I liked it. 7/10.

FREE STATE - "MEUSE RIVER IPA" - Of course it wouldn't be a trip to a brewery for me without getting the lowdown on their IPA, and this deep-orange model did not disappoint. Tingling hops, piney bite and rich malts, all balanced well and perched halfway between a single and a double IPA. 7.5/10.

FREE STATE - "WHEAT STATE GOLDEN" - Actually had this one a little earlier in my visit and was my impetus to visit the brewery in the first place ("if their humble golden ale is this solid, how might the rest of their beers be..."?). This is a classy, unassuming fruit-forward golden ale. You could drink a dozen of 'em. Very satisfying going down, and gave me zero discernible buzz. 7.5/10.

Next time you're in Lawrence you oughta get yourself some BBQ at another restaurant and then head over to Free State for some good times. Tell them the 'Jive sent you - they'll know what you mean.
Posted by Jay H. at 8:41 PM