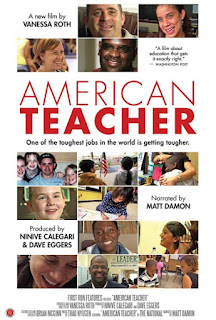 I went to a special screening of this praise-the-teachers documentary at my kid’s school the other night, and a friend mentioned to me beforehand that he’d hoped that “it would be the antidote to ‘Waiting For Superman’”. I told him I hoped not, at which point he gasped and the lights dimmed. Afterward, he incredulously asked me, “You actually liked ‘Waiting For Superman’??!? It was totally anti-teacher!”, at which point I threw up. Then I corrected him: “Not anti-teacher in the least. Anti-teachers' union. Big, big difference”. This failed to calm him, and it dawned upon me, as it often has before, that a very easy way to arrive at a point of view is to completely dismiss logic, common sense and facts in order to serve a preordained opinion that will be readily accepted by your peers. Except when it's not.


If you actually watched the pro-child, pro-parent, pro-teacher 2010 documentaries “Waiting For Superman” or “The Lottery” with your eyes and ears open, both of which are devastatingly straightforward in their diagnoses of the problems facing American public education today, you know that they were anything but anti-teacher. Both explicitly made the argument, as “American Teacher” does ad nauseum, that the most important factor in determining whether a child learns or not is the quality of his or her teacher in the classroom. No ifs, ands or buts from anyone here. Study after study has proven that a great, highly-motivated teacher who loves children and works hard to ensure their success is infinitely more valuable in an individual child’s life than an army of tenured, battle axe, just-waiting-for-my-pension teachers who can’t be disciplined, coached nor fired. Having good genetics certainly helps a kid, as do parents at home committed to a child’s education – but it’s that lone teacher at the front of the class that really makes the difference, particularly for kids “on the bubble”, who might  otherwise have some innate smarts but no ability to apply them without patient and enthusiastic guidance.