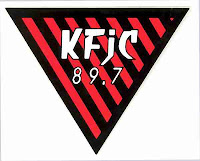 I may forever curse myself for not having been old enough to riot on the Sunset Strip in the 60s, kick out the jams w/ the MC5 & Stooges in Detroit in 1969, or pogo my ass off at the Masque in LA in 1978 with the Bags, Weirdos and Germs. But I was around and old enough to at least mark myself "present" during the heyday of what you might call "post-punk". This is commonly defined as what British and American punk rock morphed into starting around 1979, incorporating slower tempos, much more rhythm (to the point that much of the music was decidedly danceable) and more keyboards, synths and some atonality. It's a fine line one can draw between classic post-punk and "new wave", and frankly a lot of this stuff - even the good songs - was totally busting out on the British charts in the early 1980s. Siouxsie & The Banshees' outstanding "Spellbound", to name but one example, was a #22 charter in forward-looking England in 1981.

I turned 14 years old in late 1981, and as I've written about before, it was a point-of-no-return year for me in terms of maniacal music obsession. That was the year I discovered the NME, Sounds and Melody Maker (weekly music papers from the UK totally steeped in the hundreds of new bands releasing defining 45s at the time); the year I embraced underground, non-major label music and heard my first hardcore punk on the Maximum RocknRoll radio show; and the year I discovered my local college radio station, KFJC ("The Wave of The West"). Someone now long-forgotten to me in 7th grade told me about the "weird stations at the left of the dial" on my FM radio - an area I'd never before much explored. There lay KSJS (San Jose State's station), KZSU (Stanford's) and KSCU (Santa Clara University's). None of these held a proverbial candle to a station from tiny Foothill Junior College in Los Altos Hills, CA called KFJC, who had a posse of twentysomething record-collecting DJs who were totally immersed in the new records of the day, and who made it their mission to convert the uninitiated into the sounds of what had yet to be called post-punk.

Because 1981-83 KFJC was so British post-punk heavy, I actually missed out on a bunch of germinal American bands that they simply didn't play. I got to college in 1985 and was scoffed at because I'd never heard The Misfits - had barely heard of The Misfits. But I could sing you every song by The Jam, Siouxsie, Bauhaus and the Au Pairs backward and forward. I'd never heard Pere Ubu before, except for their performance of "Birdies" in "URGH - A MUSIC WAR" - a film that also did a lot to form my post-punk consciousness. (To give but one example, I still get a pleasant chill watching the incredible CRAMPS performance of "Tear It Up" give way to the AU PAIRS' "Come Again").

Ditto for The Pagans, Red Cross and The Flesh Eaters. If KFJC was playing them, I wasn't listening during those hours - and I swear with only slight exaggeration I listened to the station nearly every waking hour from '81 to '85. Near the end of that period, KFJC embraced American indie rock a la The Minutemen, Husker Du and the Meat Puppets (the SST "big three"), and added them to what was already a steady diet of LA "paisley underground" airplay of the Dream Syndicate, Green on Red and the Three O'Clock.

I want to go back to 1981 and 1982 for a minute. I want to convey what it was like to be exposed to songs that are now considered classics on a daily basis. I certainly had a bit of a "new wave" sensibility during my teenage years, so I was very open to pop-leaning, danceable art/punk much more so than I was in my snobbish pure-punk days later in the decade. Two DJs in particular at KFJC, whom I later found out were a couple, blew my mind on a weekly basis. If I remember correctly, Diana did her show on Monday nights, and Ransome Youth did his on Tuesday nights. Neither was a particularly memorable talker per se, but both made musical connections and concocted sets of new 45s that made my head spin on a weekly basis. I was constantly writing stuff down, and saving up as much money as I could ($20!) for my bi-monthly visits to Berkeley to visit my Grandparents, who'd turn me loose on Telegraph Avenue so I could spend four hours ogling records at Rasputin's, Leopold's and Univeral (worth another post down the road). Based on what I was listening to on a daily basis, I thought the relative importance and impact of bands like the Delta 5 and the Bush Tetras were far larger in the rest of the "scene" than they actually were in practice.

Most KFJC personalities in 1981-82 did lean a little more new wave than they did to the harder stuff, so mixed in with what we now rightly call classics was a lot of Squeeze, The Jam, The Specials and Kate Bush (all of whom except for Squeeze I totally loved).


The Human League were huge on KFJC (especially "Love Action") a good year before they became huge in America. I probably heard the annoying "Happy Birthday" by Altered Images 300 times. When "I Love a Man in a Uniform" by Gang of Four came out, it was played so much that when I called to request it, the DJ told me it was so overplayed on the station that they'd put a moratorium on it. Yet mixed in were then-fresh records by Throbbing Gristle, SPK and a bunch of UK punk bands of lesser repute like The Angelic Upstarts and Vice Squad, along with the list below.
Reconstructed from memory, these were the songs played the most frequently by my favorite DJs of the time - Diana, Ransome Youth, Stretch, JC Clone, Kevin Animal, Leah Angel, Boris Darling,  Buddy Awreetus, and the guy who did the punk show on Mondays after Diana called "White Noise" (Gibson?). I think you'll find it to be a fine education and mostly (not exclusively) a list of some pretty right-on songs that shaped my sensibilities for years to come.