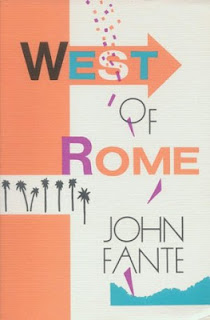 Naturally, after devouring the Dan Fante memoir of what it was like to be John Fante’s son (my review is here), I had to get busy filling the gaps in my papa Fante readings. I decided to go a little more “deep cuts” for my next Fante book and therefore chose one that I knew very little about, “WEST OF ROME”. Dan Fante lovingly mentioned a late-in-Fante’s-life novella that makes up 75% of the book, “My Dog Stupid”, in his own book. That was enough for me to give it a try – a nice way to ease back into John Fante after years of not having read him. As expected, it’s excellent. There are two parts to the book, the “long short story” My Dog Stupid, and a short story called “The Orgy”. I didn’t want either to end, and yet they’re so simple, funny and bathed in hurt, they move very quickly.


“My Dog Stupid” is what greater critical minds might call “tragicomedy”, or tragic/comic realism. Knowing what I now know about John Fante’s relationship with his kids and his wife while he puttered around Malibu in his 50s and 60s, I know that he was a bit of a bastard, yet one who also had a great sense of self-mockery and self-evaluation which comes out full-stop in this novella. While the narrative centers around a large, dumb Akita that Fante finds in his yard, and chooses to keep as a way of holding onto something that he can love and that loves back, it’s really more about losing one’s children from the nest in a time of changing morals and a fast loosening of the “old ways”.
It’s obviously the early 1970s, and the hippie era has had its effect. Fante, called “Molise” here (of course it’s Fante, basically writing an autobiographical story while changing the names of his kin), longs to shuck everything and move to Rome – the old country of his dreams – whenever life’s pressures become too much. Those pressures include a daughter sleeping with a surfer/soldier whom he doesn’t like; a son dodging the draft; another son (obviously Dan) who has a black girlfriend and smokes too much pot; and a wife who won’t let him keep a dog.
Molise alternates between bewilderment, dreams of escape and acceptance of his lot in middle age. The dog, meanwhile, has a predilection for brutally humping male humans and other large male dogs during conquest, and the descriptions of him “unsheathing his orange sword” are hilarious. Molise loves having an alpha in the house, perhaps a stand-in for his own diminished fatherly stature, even though his daughter’s boyfriend calls Stupid a “fag dog”. His marriage nearly falls apart as quickly as his children flee the nest, but you get the feeling that this is something that happens all the time between these two. Again, the line between reality and fiction is about as thin as can be. I’ll know more when I finally read “FULL OF LIFE”, the John Fante biography that’s on my list.
“The Orgy” is about forty breezy pages, a reminiscence by an older Fante about his immigrant bricklayer father in 1920s Colorado. Whether it’s fiction or a real story, I do not know, but it seems wholly plausible. His dad and his atheist, ne’er-do-well friend Frank get a claim to a “gold mine” 18 miles from Boulder from a newly-rich black man who until recently had prepped their bricklaying activities every day. What goes on at the mine, however, is very far from mining. I’ll stop right there. Just remember the phrase “hemorrhoid cheese”, which pops up during the story’s denouement. Hilarious, and exactly the sort of thing a red-faced, stammering 10-year-old boy would say when confronted with adult truths. Terrific book, and I’m on the next few from late-period Fante to try and complete the list.
Posted by Jay H. at 10:34 AM