THE RONDELLES – A BELATED APPRECIATION 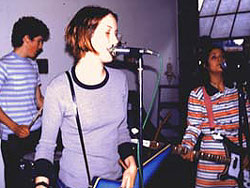 I’m a little late to this one, like 15 years late – but New Mexico’s RONDELLES sure were a blast when they were around, weren’t they? Yeah, I’d heard this analog keyboard-driven roller rink punk band before, but I’d somehow had this idea that their discography began and ended with the one 45 that the late, lamented blog STATIC PARTY posted several years ago. It ain’t the case. The Rondelles, a trio of one fella and two ladies, had a decent-sized discography from 1995-1999 that we at Hedonist Jive have been acquainting ourselves with. We’d like to take you through it, record by record, if you don’t mind.


“He’s Outta Sight / Indication / Catastrophe” 45 (1996)
This is the one that Static Party posted, and it’s one of the band’s two high-water marks. These kids – and they were indeed kids, juniors in high school! – have that learning-to-play innocence and sense of who-cares that transcends generations. It’s phenomenal lights-out farfisa party punk with singer Juliet Swango’s terrific melodious vocals. The drummer apparently drummed and played the Casio keyboard at the same time. You get the sense that things are being knocked over & broken everywhere these gawky teens are taking their act, and it’s among the high-water marks of slipshod garage rock from any era. Totally rad.


The other top-notch record this band put out. In two years they moved from a comic sort of party band into something stronger & louder. Handclaps, sudden breaks, girl group harmonies and lots of roaring guitar make for a golden EP, with all four songs being knockouts. This record in particular probably has staying power for the widest number of people, and in an alternate universe (mine), this is the defining alterna-rock of the 90s. Would have been awesome on a Lollapalooza tour.
Play The Rondelles – “Safety In Numbers”
Download The Rondelles – “Safety In Numbers”
“Fiction Romance Fast Machines” LP (1998)

Their first album, while good, is surprisingly bereft of truly great songs. It’s an effort that definitely fits in with where they’d been & is fully serviceable, but it appears they shuttled their best songs to the singles. That said, it’s got some zingers like “Drag Striprace” and the cutie-pie “Mission Irresistible”, and I’d at least listen to it if I were you.


“Revenge / Back-Stabber / Kersmash! My Eye” 45 (1998)
My single favorite song of theirs, a short crusher called “Back-Stabber”, was on this one. I’d like you to maybe take it home with you tonight.


Play The Rondelles – “Back-Stabber”
Download The Rondelles – “Backstabber”
“The Fox” LP (1999)
Here’s where things started getting really uninteresting, recorded when the band moved from Albuquerque to Washington DC. Bland alternajerk-rock with great vocals and little else. It’s apparent that someone told Juliet Swango that she had a nice voice and could maybe escape the tyranny of playing fun, reckless punk rock music & maybe make a little coin if her cards were played correctly. We’ll never know, will we?

“TV Zombie / He’s Got Heart” 45 (2000)
Last-gasp single with dumb lyics from a band unfortunately starting to run on fumes.

Of these three, “Shined Nickels” is essential, since it contains both their second and third singles, plus a few smokin’ odds and ends that find them in full brazen malt shop mode. The other two, an early-recordings-from-practice-tapes thing and an awful live record, are worthless.

In sum, I’ll admit I’m ashamed to only be doing this sort of tallying-up now. I would have loved to be in on the ground floor with this band when they were around, but they were lost in the shuffle of that period of my life – grad school, getting married, moving twice, and all that. Anyone in the HJ reading audience see them live when they were still with us?
Posted by Jay H. at 12:33 PM