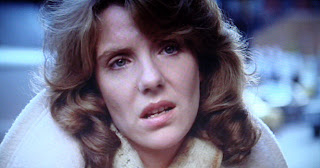 Continuing my plow through 1970s filmmaking and correcting the injustice of not having seen all worthwhile 70s American cinema, I streamed 1978’s “AN UNMARRIED WOMAN” the other evening. This film, which I actively remember Jill Clayburgh getting an academy award nomination for & which has resided in that second tier of American 70s film that I’m working my way through, is a combination of insightful, penetrating pathos and total, unadulterated schmaltz. Paul Mazursky directed, and one reason it was something I really wanted to see is because he was so insightful talking about 1970s film in the excellent documentary, “A DECADE UNDER THE INFLUENCE”, which had clips from this film as well. “An Unmarried Woman” comes a little late in the great pantheon of film from this era, and in some ways, it shows.


Let’s dispense with the easy part and acknowledge that Jill Clayburgh is fantastic as a spurned wife going through multiple stages of reckoning with the husband that unexpectedly leaves her for a younger woman. Her stages include abject grief, confusion, self-loathing, unbridled anger, promiscuity, self-discovery and…..well, wherever it is she’s supposed to be at the end of the film, as she walks through Manhattan's grimy streets carrying an oversized painting. The script doesn’t always do her acting ability justice, but there are some scenes in which she’s an absolute force of nature. My favorite is when she meets her ex-husband is his corporate office to discuss their teenage daughter and visitation and just starts to unload on him. He says, “Hey, whoa, do you want to have an argument here or what?”, to which she replies, pure fury on her face, “I WANT TO HAVE AN ARGUMENT!!”. It plays better than it reads, believe me. There’s also a long, uncomfortable scene with her therapist that felt so raw and real, it reminds you that they truly don’t make movies like this anymore.
Manhattan in the 70s is interesting just simply for being in its dirty, decaying non-glory, and I got a kick out of the many super-dated nods to disco, phones that hang on walls, and New York intellectual namedropping of people like Ingmar Bergman and Norman Mailer. So it was kind of a bummer that the last third of the movie, in which Clayburgh’s character Erica starts dating again, seemed so cheesy. On matters both love-related and sexual, her relationships struck a really hollow tone while trying to convey a sense of realism and feminist bravado. The feminist stuff was fine – it’s the subtext of the entire film – but some of the dialog, gawd. Then Bill Conti’s sweeping, overly-orchestrated music would rush in, as Clayburgh giggled with her new mate in the funky cobblestone streets of the city, and it was all my wife and I could do to keep from gagging.
So “An Unmarried Woman” is sort of a mixed bag, albeit one I’d see if I were you and if you aspire to be any sort of a 70s cineaste. It’s not as daring as it probably thought it was at the time, but Clayburgh and some stellar directing choices – like knowing when to not talk and just let her expressions do all the heavy lifting – help it rise above the normal Hollywood fare of the time, which was itself on a far higher plane than today’s.
Posted by Jay H. at 5:31 PM