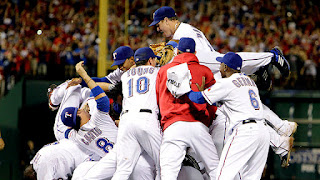 It's sorta fun to be dead wrong each and every year here on the internet about what's going to go down in Major League Baseball.  I've been doing it, and doing it well, for five years now. This way, you hone your skills, you learn from your mistakes, and you move forward. And this year I'm truly dead certain I've got it right, and that I have succesfully prognosticated a series of events that will lead to an October World Series between the Texas Rangers and my only-one-year-removed-from-being-the-World-Champion San Francisco Giants.

Wait a minute, you're saying - dude - are you flashing back to 2010? Who'd blame me, right? Yet no - I'm confident that this semi-offbeat pick has the weight of all the scientific research that I put behind it - you know, reading three preview magazines this past week and being on the internet a lot. (And it's not that offbeat, since Sports Illustrated has the Angels beating the Giants in the series; I just think it'll be Texas doing the drubbing instead). I also have tried to buck the conventional wisdom a bit and shoot holes in some common favorites - like last year's hot-at-the-right-time St. Louis Cardinals; the regressing-to-the-mean Arizona Diamondbacks (they always do after a good year); the not-good-enough Cincinnati Reds; and (yes!) the finally too-old, too-slow New York Yankees, who will finish a disgraceful third. Die, Yankees, die!

Funny, too: I wasn't all that off last year in my picks. Remember one or two days before the end of the season, when Boston and Atlanta were about to make the playoffs? I'm sure you were recalling my Boston vs. Atlanta World Series pick from earlier in the year, and mentally congratulating me for my prescience (and thanking me for my belief in the Milwaukee Brewers to boot). Well, baseball's a funny game, isn't it? Both brought simply epic collapses upon themselves, making for the single best night of baseball in decades. This was followed up a couple of weeks later by a World Series Game 6 that might seriously be the single greatest game I've ever watched, up there with the Aaron Boone game, the Joe Morgan '82 walkoff grand slam against the Dodgers (I was at that game) and of course every moment of the Giants' 2010 World Series victory. I can't imagine that this year can have the drama of last year, can it?

Well, I think it'll still be pretty wild. They've now got this one-game, play-in wild card going, which I guess I'm more or less OK with. So that's two more teams in the playoffs, albeit only for a game each. I wish I could explain my reasoning for each and every one of the placements here, but since I can't/won't, let me provide a few statements of soon-to-be-fact: