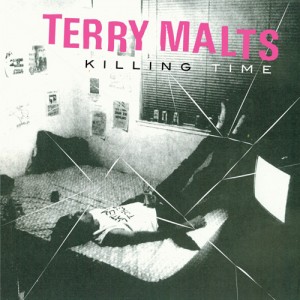 The cover art here, what with its broken glass and dead/bored teenager, looks like something better suited to something by Anti-Pasti or Chron-Gen (well, maybe with the pink lettering, not so much) - but never you mind – TERRY MALTS' “Killing Time” is a boisterous, feedback-laden set of blink/missed, hook-drenched, wall of sound pop music. Unlike just about every other record, I can’t find a turd song in the bunch – and that’s saying something.


Now perhaps you deep punkers might call it a little light in the loafers for your tastes, and maybe you pop fiends might call it a little too slashing & burning for yours. Maybe it’s true on both counts, but these San Francisco piledrivers are juuuust right far as Hedonist Jive is concerned. I’ll admit I didn’t cotton to these guys at first, either. Vocals take some getting used to, as they’re relentlessly “average”, and occasionally a little too close for comfort to late-period Joey Ramone for me, particularly when the music’s going hard for that 1-2-3-4 vibe to boot.
Generally, though, you not only get used to it – you embrace it. As I have. TERRY MALTS crank out a reverbed, fuzzed-out set of fast gnarlers, all of which sound like they were recorded in a giant cathedral with amps piled up into the stained glass. Generally you’ll find each song clocking in at a couple of minutes, tops, and everything usually centers around a thick dose of fuzz in the verses and a big wild roundhouse of a chorus. In many ways it’s kinda “English” in its overall orientation, especially late 80s/early 90s noisy reverb pop, but there’s something pretty fresh about it as well that makes “Killing Time” eminently listenable, over and over again.
They’ve done a fine job recording the 2012 atheist’s theme song, “No, I’m Not a Christian”, which truly does have the lyrical zeal of the newly-born again atheist convert. Welcome, fellas! That’s not even the best thing, though – their 45 “I’m Neurotic” – again, a total grower and not an initial shower – is an earworm of the highest order. And get this: their cover of Negative Approach’s “Can’t Tell No One”, only one of the 5 great hardcore punk songs of all time, is masterful. It could have broken down on so many levels, and yet they simply took the fightin’ words and the general forward propulsion of the song and grafted them onto their reverb/fuzz template. It’s as good a reimagining of a classic punk song as I’ve heard since The Tyrades took on Wire’s “Former Airline” nearly a decade ago. Terry Malts have one of the best releases of this young year, so if you’re tallying up what you’re going to go out & buy when you hit the "record store", should you still have one near you, put this near the top of your list.
Posted by Jay H. at 9:56 AM