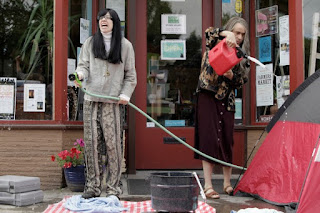 I upgraded my basic cable package to “digital enhanced” or whatever the hell they call it last year just so I could check out a key core of networks I didn’t have access to: BBC America, NHL Network and IFC. IFC were getting some media attention for their comedies, of which “PORTLANDIA” sounded the most promising; a sketch comedy show set in Portland, Oregon that made fun of that city’s holier-than-thou eco-hippies, uber-feminists, bike nazis and various alterna-jerks of all stripes. Problem was that during the two or so weeks I had the “digital enhanced” package, nothing good was on any of those channels. Re-runs, old hockey games, unfunny comedies I’d never heard of, British cross-dressing lame-fests, and so on. My wife and I decided to drop the ten extra bucks a month on HBO instead. We’re glad we did.


Meanwhile, I saw the viral “Dream of the 90s is alive in Portland” and “Put a bird on it” sketches from PORTLANDIA’s season one on YouTube and thought, “Funny, but……meh.”. It was only when Season Two came out to rave reviews from comedians I trust (usually on Twitter!) that I started to pay closer attention. This wasn’t just the usual logrolling – these folks were genuinely digging the show. So then what pops up on Netflix streaming but Season 1 of “Portlandia”. At only six episodes and 22 minutes apiece, it’s not much of a slog to complete the season in record time – hmm, let’s see: you can do it in 2 hours and 12 minutes, maybe with a few extra minutes built in to futz with your remote. Now that I’ve done that, I’m wondering why more people haven’t been touting this show than already are.
The key players who center every sketch are Fred Armisen and Carrie Brownstein. Armisen is an SNL veteran who already had the sketch comedy chops; and given that this show is executive produced by SNL creator Lorne Michaels, it already started with a pretty strong comedy pedigree. The wild card was former Sleater-Kinney guitarist Brownstein, whom I’ve seen play live a half dozen times (“SK” were my wife’s favorite band in the 90s) and who I’d have never pegged back then to be a future wacky comedienne. Yet she’s great. Often playing the straight “man” to Armisen’s more highly-strung or off-kilter weirdos, she’s excellent both at deadpan humor or at putting forth the vibe of the clueless, self-delusional egotist. This whole show seeks to (gently, mockingly) portray a city of egotists stuck on their own micro-trips – be they bicycles, music, “local food”, crafting, dumpster diving and so on.
The show this most closely resembles is “Mr. Show”, in the interconnectedness of the sketches, the recurring characters and the successful ability to mock everybody and everything. It can get a little bizarre at times too, not quite “Tim & Eric” bizarre, but it does have sketch endings that go CLUNK when you least expect it. Charmingly so, though. Kyle MacLachlan memorably plays the Mayor of Portland, a fun-loving, bicycle helmet-wearing goofball who only wants his city to be cooler than Seattle, and who oh by the way secretly moonlights in a dub reggae band that play “The real heavy stuff, Augustus Pablo heavy”. The show has coffee jokes, Japanese cutie-pie tourist jokes, Adult Hide & Seek league jokes, beard jokes, feminist bookstore jokes (Armisen is amazing in those sketches) and so on. I’m into it – and so should you!
Posted by Jay H. at 2:55 PM