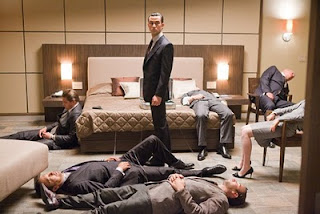 Just a quick look in on two of the summer’s hottest blockbusters today. Yeah, in the space of 24 hours this past weekend I saw both “INCEPTION” and “TOY STORY 3” – and am here to report that both are excellent and well worth your time. Let’s start with the former, shall we? “INCEPTION” is the latest from Christopher Nolan, who only directed my favorite film of the most recent decade. I went in expecting a fun, baffling, “Memento”-like film about dream states, but from the moment I strapped in to my seat it was GO time. This movie started with “Bourne Identity”-style thrills and really didn’t let up for 150 minutes. I believe you call it an “edge of your seat thrill ride”, am I right? Yet it was more than that – “Inception” is a smart, blink-and-you-missed thriller with a deep metaphysical angle about dreams within dreams within dreams (within dreams?), and the ending is open to at least three plausible and wild-ass interpretations I’ve heard so far. The audience in our theater gasped, and then applauded the final scene. We all let out a collective big breath after this one. It’s that kind of film. Hedonist Jive says check it out.
We almost didn’t see “TOY STORY 3” because the one thing that gives my 6-year-old son nightmares is mannequins. Now there are no mannequins in this film, but the character of “Big Baby” looked sufficiently enough like one – particularly with a damaged left eye and weird crayon marks on his legs – that he decided to delay the gratification that would come from finishing the Toy Story franchise until he was, oh, about 10 or so. Three weeks later, we got the all-clear, and as it turned out, the only part that caused any distress at all was when “Lots O’ Huggin’ Bear” made Big Baby cry. See, aren’t you excited about this already? Suffice to say that if you’re a fan of Pixar’s genius already, you’ll only confirm it yet again. This is truly one of their best, up there with “WALL-E” and “MONSTERS INC”. They up their animation game with each film, and I marvel at the economy in which they tell stories. There is plenty for the adults to rally around here as well, particularly a Barbie doll’s shouted soliloquy about “authority should derive from the consent of the governed”. This film explores maudlin themes of loss and children who grow up before you want them to, as well as fairly sophisticated notions of power and control. And boy are some of those toys cute. I’m glad I can stand behind a kid as my excuse for paying $10 to see these Pixar films, but rest assured if I didn’t have one I’d be going anyway.
Posted by Jay H. at 9:02 AM