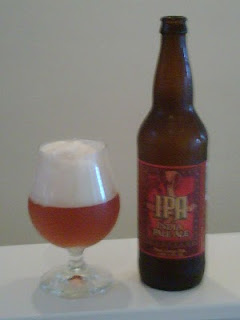 On my previous, beer-only blog I reviewed a superlative Double IPA from Stockton’s VALLEY BREWING called ÜBERHOPPY earlier this year. It was something of a surprise for those of us who look down our noses at things from California’s Central Valley that aren’t almonds, fruits or vegetables. I had this to say about it:
“….just as good as the pundits said. It’s a delicious double IPA, with a thick, foamy “two-finger” head, and a really deep citrus taste. Not “fruity”, mind you, and perhaps hopped not beyond belief, yet certainly beyond reason. It’s an exceptionally fresh, bitter biter of a beer – very rich and thick in its mouthfeel, and puckering on the aftertaste. Hopheads will of course be delighted. They’ll come for the hops and stay for the fresh, deep citrus flavor….”

Pretty clever review, ain’t it? I figured that beer was so great I’d want to try any India Pale Ale these guys coughed up. Accordingly, I bought a bottle of VALLEY BREWING IPA the other day, and lo and behold, this $5.99 bomber is another excellent west coaster from these folks. It has one of the all-time foamiest heads, a real pillow puff that took forever and a day to settle down. Hops are super-assertive and spicy, and the beer itself tastes like I’m drinking a ground-up hop cone. Which, in a way, I guess I am. Excellent mix between the opposite poles of “piney” and “citrus” – a real west coast classic. 8/10. I posted my initial happily dazed reaction on Twitter and follower JesseTheHut wrote me back, saying, “Sad to see their operation crumbling. RE: Valley. They sold out and shafted their head brewer. Such a cool guy too. Shame.” Say what?

So in real time, let’s figure out what’s going on here. I’m picking up the phone to call VALLEY BREWING HQ and we’re gonna liveblog it:

So there you have it - hard-hitting journalism at its best. They obviously don’t see things crumbling. If anyone knows more about this fascinating saga, let us know. And in the meantime, pounce if you see an IPA from VALLEY BREWING anywhere near your person.
Posted by Jay H. at 11:28 AM