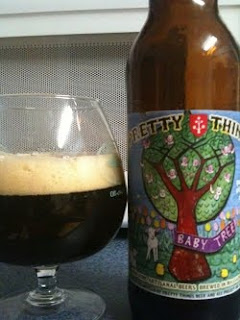 One of my favorite things about a work trip to New York, such as the one I undertook two weeks ago, is the gravitational pull the city’s amazingly robust beer culture has on me. I’d call NYC one of the four main hubs of quality beer activity in the US, along with the West Coast standbys of Seattle, San Francisco and San Diego. (Don’t worry Chicago and greater Michigan, we still love ya. Portland – you just need to work on some better breweries). One of my least favorite things about New York is when I leave my beloved iPhone 3GS in the back of a taxi, which then pulls away only seconds after I realize what I’ve done. Said iPhone contained all of my photo snaps of the fine ales I’d just consumed the previous two evenings, as well as my painstakingly-enumerated, eh, “tasting notes”.
So let’s reconstruct from memory just what an amazing bounty was to be had in New York at this moment in time – mid-July 2010:
PRETTY THINGS – “BABY TREE” – This is one of the two main highlights of the visit, an absolute genius quadrupel ale enjoyed on tap at The Ginger Man. A dark, plum-packed 9% ABV beer that has a little wisp of smoke in the flavor as well. In the fine tradition of the Belgian Abbey ales, and definitely the best thing from this new upstart New England brewer I’ve had. (Photo ripped off from the excellent beer blog The Drunken Polack). 9/10.

TWO BROTHERS – “THE BITTER END” – It isn’t often that you find The Hedonist Jive raving about a simple pale ale, but it isn’t often that I drink one this outstanding, either. This was quaffed on tap at a cool Lower East Side restaurant and bar (a “gastropub”, if you will) called SPITZER’S CORNER. I loved this place – their food was amazing (smoked fish plate + a bowl of artisan mac-n-cheese!) – and this Illinois brewer’s pale ale was just perfect for a hot late afternoon. So fresh, so hoppy, so flavorful – the closest equivalent is Three Floyds’ “Alpha King”, and this is nearly as good. 9/10.

NOGNE Ø - “SUNTURNBREW” – A sweet smoked barleywine from Norway, something I got to try as a sample at Rattle-N-Hum in Midtown, then came back two nights later to enjoy in its own (larger) glass. Orally fixated folks are always going off about “mouthfeel”, but this one is the real deal, delivering a tongue-clinging velvety pillow of smoke and dark fruits. An 11% whopper that you’ll want to make sure you’re in the proper frame of mind for. 8.5/10.

SIXPOINT BREWING – “BENGALI TIGER” – I raved and hooted about this IPA on my old beer blog and gave it a 10/10 the last time I had it. This time it didn’t quite have the je ne sais quoi I’d remembered. Very hoppy, tangy and a murky deep yellow. Definitely an “imperial” in terms of taste, and heavy on the piney end of the IPA scale. I’m knocking it down to a very good 7.5/10.

CIGAR CITY – “JAI ALAI” IPA – Malty and caramel/creamy – in an IPA? Yeah, this heavily-hyped big boy was really delicious but not a world-beater. I’d better have another three of these to see if we can bump it up from a 7.5/10.

NEBRASKA BREWING - “EOS HEFEWEIZEN” – Things start getting lost on this one; the notes are all in the phone sitting in the cab driver’s house now. I remember a pretty good wheat beer and my burned-to-memory score of 7/10.

GREAT DIVIDE – “CLAYMORE” SCOTCH ALE – Same here. Enjoyed this malty red “wee heavy” at the Blind Tiger Ale House, but wouldn’t go out of my way to have it again. 7/10.

NEBRASKA BREWING – “APRICOT AU POIVRE SAISON” – The only proverbial turd in the punchbowl this trip. I’m excited about this brewer – apparently their big beers are amazing, and I picked up a bottle of their HOP GOD at this incredible Whole Foods beer store in lower Manhattan to take home ($22! It better be!). This thing was a bit of a mess, though – a strange fruity Belgian ale that lacked character and balance. We’ll grant that we probably tasted Nebraska Brewing’s more basic ales, and that the real treasures are to be found in their aged and 9%+ big boy beers. 5/10.

That’s all for now – let me know if I missed any East Coast rarities that I need to hunt down next time.
Posted by Jay H. at 6:00 AM