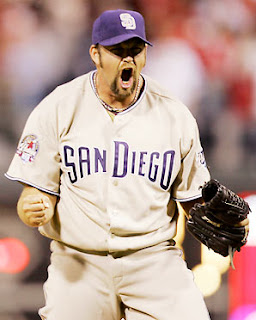 So I'm sitting there watching the All-Star game last night, realizing that a huge chunk of the modern-day greats were all assembled in Anaheim. The good guys. The ballplayers I'll spend $30+ per ticket to see. Me, I'm a big baseball fan, and have been ever since the August 14th, 1977 San Francisco Giants doubleheader vs. the Cincinnati Reds "Big Red Machine" club at Candlestick Park that changed my friggin' life. Baseball's been a constant for me in the intervening 33 years like nothing else outside of family, and while my unwavering allegiance to the Giants has produced a great deal of psychic pain during that period, I shall never cease to find the cleansing glory in settling in for a night game on TV, in a long drive listening to baseball on the radio, or in my 33-years-running obsession with devouring the morning paper and the MLB box scores.

I don't limit my fave players to the Giants, though. There are certain guys that have a swagger, or a weird quirk, or some ungodly combination of talents that just makes them an utter blast to watch. I hate hate hate the LA Dodgers and always have, but for a short period in time my favorite player in the universe was their lights-out relief pitcher Eric Gagne. Dodger fans would wave these 9th-inning flags that said "GAME OVER", and yep - once Gagne came in, you pretty much could start packing up your stuff, because no one was going to score or knock his 101mph fastball into the seats. Of course, you sports fans out there have since learned that Gagne was pumped chock full of steroids during that period, and was a total chump once he got off the juice. So no, he's not my favorite fella any more. But here are 10 that are:

1. TIM LINCECUM (San Francisco) - Years from now, when "The Freak" is undergoing Tommy John surgery or on the permanent disabled list a la Mark Prior, we'll marvel at how this long-haired, pot-smoking 160-pound beanpole dominated National League hitters the way he has for three years now. He defies all conventional notions of the athlete, and has such natural talent to blow hitters away that every game he pitches is an absolute must-see. And oh yeah, he plays for my team.

2. BRIAN MCCANN (Atlanta) - The impetus for this post. I don't know what it is about this Southern-fried, home run-blastin' catcher, but I totally dig him. Last night he won the All-Star game for the National League for the first time in 17 years...! I've seen him change many games with one swing of the bat, and he just seems so goshdarned likeable.

3. ICHIRO SUZUKI (Seattle) - Even my wife knows who he is. A legend, a Japanese hero, and quite possible the greatest seeing-eye singles hitter in the history of the game.

4. VLADAMIR GUERRERO (Texas) - This guy swings at everything within a 10-foot range of the batters' box every year, and continues to rake deep into his 30s.He might be having one of his 2 or 3 best years right now for Texas. Giants radio talk show callers still whine and moan about how we didn't sign this guy back in 2006 or whatever it was, forgetting that Vlad made it very clear that he didn't want to play for us under any circumstances. But man, he would've been fun to watch 162 times a year.

5. HEATH BELL (San Diego) - A light-outs moose man reliever. The new Gagne. Needs to be a household name. Shut the door. Game over. I truly hope he's not on 'roids.

6. PABLO SANDOVAL (San Francisco) - In a bit of a funk this year, but "the Big Panda" brings so much unbridled passion and joie de vivre to the game of baseball, I don't care that he's hitting .263 and leading the team in double-play balls. Pandamania was massive last year in the Bay Area, and will be again in the second half of the season when Pablo steals our hearts again by bopping everything that floats over the plate into Triples Alley and into the San Francisco Bay. Mark my words, haters.

7. RYAN BRAUN (Milwaukee) - May be the best hitter in baseball not named Albert Pujols. Quietly starting a hall-of-fame career up in ignored Milwaukee, putting up 35 homers and 120 RBIs each and every year he's been in the league. No reason to think this on-base machine's going to stop either. Definitely in the "be very afraid" category when he steps in the box against one of your pitchers, a la Pujols circa now and Barry Bonds of the early 2000s.

8. NICK SWISHER (NY Yankees) - So glad to see this guy get a last-minute All-Star nod this week, even though he plays for the Yankees, the only other team besides LA that I can muster true hate for. When he was with Oakland he was the long-haired, bearded practical joking maniac of the team, who looked like he was perpetually hung over even when he was doing high-dive catches in the outfield and cranking out homers to right field. Every article I read about him makes me think he's the perfect shaving cream pie wise-ass you'd want to have on your side. Again, too bad he's on the Yankees and not, say, the Blue Jays or something.

9. ZAC GREINKE (Kansas City) - Last year's AL Cy Young is having a tough time this year, but from what I gather, just walking to the mound is tough enough for this notoriously shy and uber-reclusive superstar. I have to admire his ability under these circumstances to get just about everybody he faces out, and to win on a horrifically bad Royals team.

10. TORII HUNTER (Anaheim) - Another fun-loving, gotta-have-him-on-your-team player who's amazing with both the glove and the bat. He doesn't put up monster numbers, but has been a consistent RBI machine and Gold Glover for a decade now, and he just looks like he's having a blast out there. He would have looked pretty spectacular in orange, white and black, don't you think?