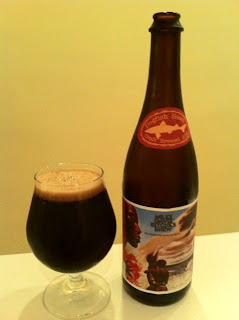 As I understand it, there’s a new TV program on the Discovery Channel called “BREW MASTERS” that is a beer-centric version of Anthony Bordain’s shows, in which Dogfish Head Brewing’s Sam Calagione travels the globe to create new, increasingly wilder beers using lost or local ingredients. I had heard some whispers of this a while ago; it debuted this past Sunday, and THE DRUNKEN POLACK already has a review – not just of the show, but of the very beer we’re going to be discussing today. I Tivo’ed the program and will likely dig into it over this Thanksgiving holiday. The first episode concerns this very beer, the very limited and very hyped BITCHES BREW.
We can tackle this from all sorts of angles. I can tell you how I think the original Miles Davis record this beer was named after is more than a little overrated, and then you can go into the comments and tell me, “no wayy mang, u r so stupid get ur head out of ur ass”. We can talk about the release of this beer, which was quick and merciless. I think some may still be around, but you’re going to have to hunt – especially after the Discovery Channel show. I bought mine a couple of months ago, made a special trip to CITY BEER in San Francisco just to do so – and they told me I was getting one of the last 2 or 3.

Or – how about this – let’s talk about the beer itself. BITCHES BREW caught me off guard a little. Since it’s made with “honey and gesho”, whatever gesho is, I was expecting a light golden ale. Out comes tumbling an inky, deep black roasted ale that gives off strong indications of hot cocoa and chocolate. There’s some sweetness, and yes, there’s a honey taste as well. This medium-bodied bodice-ripper is right in the Russian Imperial Stout wheelhouse – a big 9% ABV, jet-black and uber-powerful – yet still something experimental and different. Extremely malty, like a milk (not dark) chocolate malt, really smooth, and hey, there really are some mysterious ancient ingredient secrets buried in here. I’m all over this one. 8/10.
Posted by Jay H. at 1:48 PM