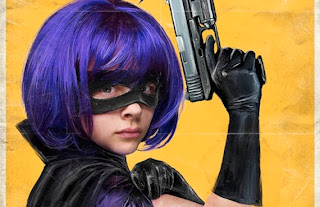 I’m not going to implore you to watch this fun trifle of a film on its cinematic merits - but that said, I’m also not going to get all uppity and pretend that I didn’t really enjoy what was essentially a blockbuster-y superhero movie (or perhaps a parody of same). No, it’s really not something that’s much of a cry from certain other good-vs.-evil adaptations of Marvel and DC Comics. In many ways, “KICK-ASS” reminded me of the Spider Man films, two of which I’ve actually seen. You can’t get that time back once you’ve spent it, can you? Sigh. This one has a picked-on kid who takes matters into his own hands, tries to become super, fails, but gets caught up fighting bad guys anyway, with a big climactic denouement that takes place in a skyscraper, with superheroes soaring through the air in triumph at the end.
No, “KICK-ASS” probably doesn’t stand up for eternity if not for one character, and a far-reaching decision made by the filmmakers. They cast little Chloe Grace Moretz, an 11-year-old pixie who looks like an 11-year-old pixie, into the scene-stealing role of “Hit Girl”, a fantastically violent, horrifically foul-mouthed whirling dervish who pretty much annihilates anything she fights. I read about it beforehand, but it was funnier than anything I imagined. Her first real fight scene is so good I’m going to post a video link to it here. Hit Girl surprises the pretend superhero “Kick Ass” by rescuing him from certain death at the hands of a drug gang. She kicks off her frenzy of garroting, limb-slashing and head-lopping with a what-did-she-just-say, "Okay, you cunts. Let's see what you can do now!". Then she lets loose to the sound of The Dickies’ version of “The Banana Splits Theme”. I think I may have piddled my pants during this particular scene.

Later, when the naïve and dumbfounded “Kick Ass” asks how he can find her in case he needs help again, she mockingly tells him, “You just contact the mayor's office. He has a special signal he shines in the sky. It's in the shape of a giant cock”. It’s funny just writing it – just imagine it coming out of the mouth of an 11-year-old girl who has just flayed several gangsters to a violent, bleeding death. When she’s on screen, this film is great. Otherwise, it’s still kinda fun. Hedonist Jive thinks you might want to check it out.