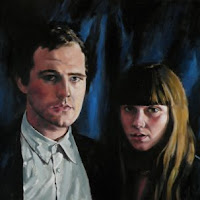 It’s sort of incongruent with my growing dependence on pop music (and my back-breaking “back catalog” record, CD and mp3 collection), but one of my favorite bands right now is the trippy dub/psych/jamz duo THE FABULOUS DIAMONDS. Their debut LP in 2008 on Siltbreeze was a stripped-down, echo-laden keyboard-and-drum fest more in line with Augustus Pablo and the 70s dubbers than with anything “modern” – although there was no mistaking them for a rock and roll band. Theirs is a minimalist sound that washes over you in lines and color, repeating itself in earworms that you’d rather take with you than flush out. I was wondering when they’d be getting around to making a new record for me.
“FABULOUS DIAMONDS II” is more lush and noisy than its predecessor, but it’s every bit as good. They don’t pull (or push) any punches in song titling either – each song’s length is its name, (i.e. “12 mins 15 secs” is the number that kicks things off). If you’re a partisan for synth- or keyboard driven pre-punk bands like SUICIDE and SILVER APPLES, I’m guessing you’ll find a lot to love here – but so will the space rockers, dubheads and FALL fans. There a lot of chant-like incantations over the groove, which lyrically won’t make sense to anyone besides the two Australians who are chanting them. To say it’s “hypnotic” is not to succumb to a cliché, because music this repetitious and stretched-out is by definition hypnotic if you’ve already decided to hang on for the ride. In only one place does the band start pooping around too much, and that’s the closing track, which repeats stabbing keyboard noise for about 90%, and when it finally softens a bit to let something resembling a song in, the thing’s over. Bo-ring. But that’s one bum note in a record that doesn’t have any others. I saw them live in 2008 and they were outstanding – let’s hope they can make the trip over from Down Under again and deliver us to the astral plane yet again.
Posted by Jay H. at 6:00 AM