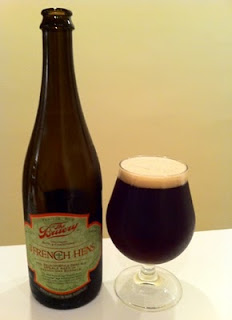 I used to get pretty hopped up about Christmas beer season. Before brewers started making experimental and limited-release brews a regular feature of their lineups, the only way to escape the clutches of the yearly pale ale/amber/stout tyranny was the brewer’s annual November/December foray into spiced, malty, (sometimes) higher-ABV holiday beers. Not anymore. These days Christmas beers are, to my way of thinking, often an afterthought, something a brewer needs to do to maintain seasonality and possibly shift few extra units, but rarely are they the best beers you’ll drink all year. The really stellar ones tend not to be “holiday” beers per se, but happen to be dark, heavy and released in the Winter months. So color me a little more jaded than in years past – which doesn’t mean I’m not still gonna try a whole passel of them this year anyway.
Here are three we’ve explored to start off the 2010 winter drinking season:

THE BRUERY – “3 FRENCH HENS” – (pictured above). I’ll happily pay $11.99 or more for any beer THE BRUERY bottles, and that’s what this one set me back. Last year’s “Two Turtle Doves” was a revelation, and it speaks truth to my aforementioned lie about the general decline of holiday beers' quality. This year’s model, to of course be followed by “4 Calling Birds” next year, made me sit bolt upright and declare, “Sweet Jesus It’s Christmas” as I brought the first sip down my throat. It’s 75% “Belgian strong dark ale”, 25% aged in French oak barrels, and it brings a real silky texture with a mix of oriental spices mixed with cinnamon stick. Is it possibly overspiced? Maybe it is. I enjoyed every moment of it except for the three or four when I was asking myself that question. 7.5/10.

NINKASI BREWING – “SLEIGH'R” – They call this one a “dark double alt” and I couldn’t resist, even though of the three NINKASI BREWING beers I’ve tried, only one – “Tricerahops” – was above average (and that one was way above). This has all the ingredients of the classic Christmas beer – nutmeg and spice, dark roasted cocoa taste, but its thin-ish body left me wanting something with a little more oomph. This, alas, wasn’t it. 6.5/10.

ANCHOR BREWING – “OUR SPECIAL ALE 2010” – In San Francisco, where I live, the annual Anchor Brewing “Our Special Ale” is a rite of passage into the new year. You’re just not complete until you’ve tried this year's formulation. More often than not, it’s excellent and sometimes revelatory. Lately it seems to be slipping a bit, however, and 2010’s the worst in recent memory. A bland, uninspiring malt bomb with only a hint of spicing, thin body and even a little aspirin in the aftertaste. What just happened? 4.5/10.
So it’s THE BRUERY in the early rounds for Xmas beer-off 2010. Watch this space for a report on Rounds 2 and 3 as the true drinking season commences.
Posted by Jay H. at 8:54 AM