A ROCK AND ROLL MOMENT FOR THE AGES 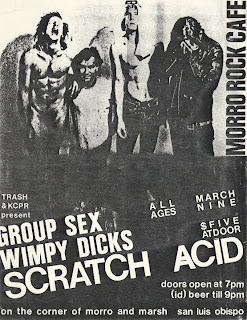 I was going through a mementos box that I’ve been keeping for a while, and came across this flyer for an exceptionally memorable rocknroll show I went to in early 1987. I drove five people up from Santa Barbara in my 4-person 1980 Mustang to go see Scratch Acid, but they, mind-melting as they were, were not the real story of the night. The real story was the opening band GROUP SEX, from Nipomo, CA, and their jaw-dropping 3-minute set. In it those of us in attendance witnessed a lifetime’s worth of frustration, rage, love, disco dancing, little people, and the negation of the human spirit.

I recounted this evening in 2005 on my old blog Agony Shorthand, but figured it needed to be told again, since I found the flyer and all:

I think even back in March 1987, I knew I was pretty lucky to have seen SCRATCH ACID play live, not simply because I could sense that they'd break up soon (which they did), but because they seemed fairly groundbreaking in their way even at the time. The show was at a dumpy club in small college town San Luis Obispo, California with two bands I'll have a hard time forgetting: "GROUP SEX" and the "WIMPY DICKS". The latter were some dumb-ass local favorite funnypunk band with songs that ragged on their town, but the former were just on fire the night I saw them.

Whenever someone asks me about memorable shows I've seen -- which, truth be told, never actually happens -- I tell them about Group Sex in SLO, CA. The band came on stage with two identical-twin bearded drummers with full kits, the sort of beer doggie dudes you'd expect to find sucking down Coronas at the Cabo Wabo Cantina, and this boyfriend/girlfriend pair on guitar and bass respectively. (I later learned that their names were "Ron E. Fast" and "Janey"). The two drummers started in together with this ripping-fast hardcore-tempo pattern, and the guitarist started to hiss and feed back and play some generic HC riff. After about 10 seconds, though, someone -- it appeared to be the bass player -- screwed up, with unleashed a torrent of filthy invective from Ron E. Fast ("You motherfucker goddamn sonofabitch whythefuckcan'tyouplay etc."). Janey actually started to blubber and cry right into her mic, and profusely apologized to the crowd.

So the two goofball drummers started up their hardcore beats again, but this time "Fast"'s guitar shorted out or something, and everything ground to a quick halt. He immediately hefted his guitar, and shattered it into a bazillion pieces with one swing against the brick back wall behind the stage. The shocked whole crowd let out a collective "whoooa....", and then Janey just started crying again. She stood there at the mic bawling and shaking, "You don't understand you guys, he's really a nice guy, he really is, we're really a lot better than this, please don't hate us you guys....". Just then, the house lights came up, and the soundman quickly threw on some 1976 vintage disco music, "I Love The Nightlife" or something, and in seconds, Ron E. Fast and Janey jumped from the stage and immediately started disco-dancing together on the now-cleared floor. As everyone stood watching them in total awe, a "little person", also bearded, scampered out from behind the sound board and started picking up the guitar pieces from the floor. It was beyond belief, and they were only the opening band! We ran out to the car immediately to relive and retell the moment over a 6-pack of Mickey Bigmouths. W-o-w.

So thanks for letting me get that tale off my chest; it has only lived on via the oral tradition thusfar, and of course, it was far more weird and ridiculous than it likely reads to you on the screen.

This post received a comment from Ron E. Fast himself in 2008, saying “and i was pissed that the guitar was fuckin up not at janie......were married 25 yrs now”. So in other words, it wasn’t the bass player – his wife – who was having the problems, it was Fast’s guitar, and the “filthy invective” that I remember hearing was entirely self-directed. A magical evening, one that I hope I was able to recreate at some level.
Posted by Jay H. at 4:12 PM