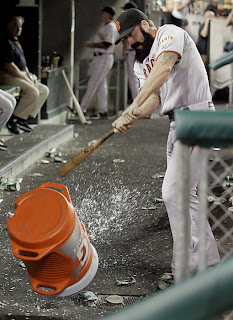 And mort they most definitely are. No, it wasn't that long ago that I was presenting to Hedonist Jive readers my 2011 predictions, and here we are wrapping up the season already. Sure, there are nearly another two months of baseball to go, and I'll be dipping in and out during September and will certainly watch the playoffs and "The Fall Classic", a few games anyway. I got used to doing so for many years without my San Francisco Giants being a part of anything - years in which they were mathematically eliminated from the playoffs in early August, or years in which they'd fake a run to first place for a few weeks and then sink like a stone into fourth place, usually (gasp) somewhere behind The Dodgers. No, this year's inability to make the playoffs - and no, I'm not in the dwindling "you gotta belieeeeve" camp - doesn't really sting that much after winning the World Series last year. It's almost like welcoming back an old friend. I just hope he doesn't stay long.

There's really no shame in being a second place, 7 or 8 games out of first place to a surging Diamondbacks team. Not when every single player but one in the starting lineup spent time on the disabled list this year. Seriously! Only Aubrey Huff stayed healthy, and even he was out a few games early on (and he totally sucked this year too). All I ask is that we finish with a .500 record or higher, and then we finish higher than the Dodgers. That's it. I'll call it a decent year and pound the 'ol mitt in anticipation of 2012.

The Giants lost two productive sparkplug starters - Buster Posey and Freddy Sanchez - to ugly injuries fairly early in the year. If they were barely favorites to repeat in the NL in 2011, this pretty much blew up their chances - and yet, for a while, the boys kept winning anyway. Then a whole host of guys went down, including important ones like Pablo Sandoval, Andres Torres, Cody Ross and Brandon Belt, as well as unimportant cogs like Barry Zito, Miquel Tejada and Jonathan Sanchez. Several players who had magical years or postseasons in 2010 pretty much disappeared in 2011: Ross, Torres, Huff, Pat Burrell and others were total zeroes and mostly space-wasters, even when healthy. Belt, the rookie who was handed the starting first baseman's job on opening day, and later the outfield when Huff couldn't cut it out there, never matched his purported promise and was seesawed back and forth between the majors and minors. Giants fans howled that he simply needed to be given a chance - I was one of them - and he's up and starting right now. He's unfortunately been the master of the infield pop-up and the ill-timed strikeout. Time to get more AAA seasoning; the fairy tale Buster Posey-like season wasn't to be, even though I think he's still got it in him to be a quality starter.

The team known for their outstanding pitching, led by Tim Lincecum, Matt Cain and weird-beard reliever Brian Wilson, are now equally known for being the worst-hitting team in baseball. It has put a "they were lucky in 2010" pox on their accomplishments, and it made them nearly unwatchable the past two months. A 1-0 lead sometimes stood up thanks to the incredible pitching, but more often then not it was the only run they'd get in a given game, and the fans knew it. We savored any run, and hoped that this was the game where Timmy or Cainer or Vogey would go 8 or 9 and pitch another batch of shutout innings.

Vogey? Yes, there were some great things that happened this year. Everyone loved the story of Ryan Vogelsong, the ultimate washed-out journeyman who was pitching in Japan last year and only joined the Giants because of a halfway decent spring training and once Zito got hurt. He proceeded to pitch so incredibly that he made the All-Star team, and even here in September he's still pitching like a stud. Enjoy it while it lasts. Pablo Sandoval was mostly awesome this year as well, despite injuries, and brought his career back to life after an embarrassing 2010 that was really the only black mark on the whole blessed SF Giants season. Other good things? We were first place more of the year than not; every game sold out; the fans were still basking in the afterglow; and the pitching, with hiccups here and there, was still lights-out.

I'm already mentally constructing my moves for next year. The Giants helped me out last week by bidding adieu to Tejada and to Aaron Roward, despite the latter still being owed $6 million for the 2012 season. No takers. See ya. Here's what I'd do. Keep a rotation of Lincecum/Cain/Bumgarner/Vogelsong, and whomever else jumps out of the minors to surprise us for the 5th spot (the Giants still have a fairly talent-rich farm system). Let Zito go. Trade the mercurial Jonathan Sanchez for whatever we can get now, which probably won't be much. Keep the bullpen together as is - there's nothing there I'd mess with, except for giving Dan Runzler the heave-ho.

The lineup needs to almost go into "rebuilding" mode. I see an infield of Belt, a newly healthy Freddy Sanchez, Brandon Crawford at short and Sandoval at third. Posey behind the plate (yes!). I see an outfield of Nate Schierholtz and maybe Cody Ross. Everyone else can take a hike - Torres, Burrell, anyone else. Huff needs to take a seat on the bench. Did I mention Carlos Beltran, the Giants' big August trade? Let him go to someone else that will overpay him. He's an immense talent, most certainly hitting the downslope of his career. I admit that this lineup I'm constructing is still very, very weak - even with Posey and Sanchez back. A big offseason signing (Prince Fielder?) would make me very happy - then shift to an outfield of Belt, Schierholtz and maybe Ross. Still doesn't make me pick them to go back to The Show in 2012, but you never know, right?

Put a fork in this baseball season, baby - it is well done. I'm turning my attention to the NHL this year, I've already decided - even plunked down for a subscription to The Hockey News, which I do about every 5 years or so when I get all hockey-crazy. I know that at least one or two Hedonist Jive readers can't wait for my 2011-12 season predictions there, so sit tight and we'll see you in October.