GETTING DOWN WITH THE GIRLS AT DAWN 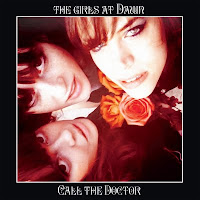 I’ve tried not to make too big of a secret of how my musical tastes have evolved over the past decade toward a distinct preference for female-fronted, pop-rooted but still raw & rough bands. It’s not that I still don’t cotton to straight-up, dude-ified garage punk or rawk, but so many of the songs that hit my cranium & stay there these days come from bands led by women, usually those who root their damaged guitar & feedback work within something approaching “harmony”. I’m talking about Grass Widow, Veronica Falls, White Mystery, Yellow Fever, The Dum Dum Girls (before their awful recent records), Eternal Summers, Soft Science, Liminanas & a few more. On the dude side of the gender divide, I’m a big fan of Times New Viking (who are often fronted by a woman), Sic Alps, Thee Oh Sees, Ty Segall, Wax Idols, Silver Shampoo and some others I’m forgetting. There’s not a lot of rhyme or reason to it, nor does it matter one iota, but my tastes seem to stack up pretty much 50/50 feminine/masculine, with women matching their population presence while greatly outweighing their representation within rocknroll.


One of my favorite recent discs is all girl, all the time. THE GIRLS AT DAWN are from Brooklyn and they put out an album last year called “CALL THE DOCTOR” that I only got around to listening to in its entirely this year, thanks to Spotify (subject of a forthcoming post in & of itself). Now I can’t stop playing it. “Call The Doctor” is about as ruff-n-ready as it comes, all Gories-style drum thumping, pulse-rushing tempos and chiming, echoey guitars. Circling around everything are swirling, semi-harmonious female voices – three of ‘em! – which sometimes sounds sweet as pie and sometimes almost weirdly psychedelic. It’s a garage band to be sure, and one that knows when to say when. Most songs hit about two minutes and then grind to a halt. We like that here at The Hedonist Jive.
I’d put this excellent young band – whom I hope to Christ haven’t broken up already like they all seem to – squarely in the 60s punk camp, one informed by girl groups, 1990s garage and a psychedelic stew of their own making. You listen to them and think maybe you’ve heard it before, and then you can’t put your finger on where. Play this YouTube “video”, which is actually just a song, look at their picture, and let me know what you think.