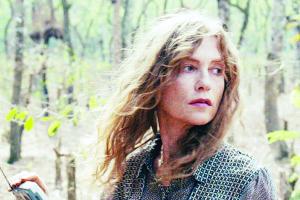 The French director Claire Denis is someone whom I've read a lot about over the years - the NY Times film critics seem to pay special attention to her - yet whose films I've never seen. "BEAU TRAVAIL" I believe I once came close to seeing. Let me know if I should invest the time. Isabelle Huppert, on the other hand, is one of my favorite actresses on the planet, and frankly of all time. She absolutely owns every film she's in, and often combines a transgressive meanness or self-destructive streak with her slim, pretty femininity and nearly ageless beauty (she's 58 and looks a non-plastic 40 years of age - may we also be so lucky). She's best known in the US for "The Piano Teacher", a film so skin-crawling I couldn't help but want to walk out at the same time I was being dazzled by Huppert's self-hating, ultra-ruinous performance.

"WHITE MATERIAL" is a 2009 film directed by Denis and starting Huppert, who is on screen for about 90% of the movie. She's a coffee plantation owner in a nameless African country at a time when that country is exploding into violent, murderous civil war. She, alone in complete denial among the 4 white people who seem to be in this country (all of whom are in her family), wants to stick it out. Returning to France is about the worst thing she can imagine, worse than seeing all of her workers flee the plantation, worse than paying thugs $100 just to leave her plantation, and worse than tiny and then much larger acts of violence that she sees all around her. Her character, completely lost in ego, denies than anything larger is going on and does everything possible to ignore that she's likely mere hours away from having her life & livelihood taken from her.

The film is no masterpiece, but it is absolutely visually stunning. This is Africa in all its seething, tropical and sometimes violent non-glory. Child soldiers with huge guns and dull, rusted machetes appear in groups out of trees, their eyes wide and their minds full of hate. The beauty of the hills and valleys in which they live is contrasting with the random and senseless killings that are going on within them, which are shown in blood-splattering full color. People pile on tops of buses and vans and live a life that just so incredibly desperate. Having been to Kenya & Tanzania myself, though, it's spot-on. There's a quiet dignity and loads of humanity everywhere, yet besotted by poverty and ever-shifting tribal wars than don't make any sense to Western eyes. Denis captures all of this quite well, frequently without words and just the strength of her cinematography. Huppert is amazing as always, and her final act in the film with leave you, as we did, wondering what the hell just happened. A good one for discussion and contemplation - Hedonist Jive says check it out.
Posted by Jay H. at 10:20 AM