THE HEDONIST JIVE TAKE ON HIP-HOP 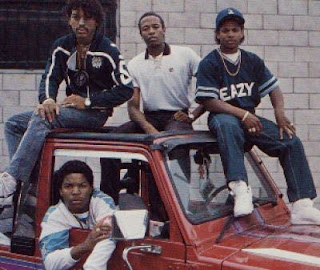 Ever since my days as a one-dimensional punk rock music fan, I’ve thankfully been pretty omnivorous in my musical tastes. Rock usually carries the day, but not without some music-collection competition from 70s Jamaican dub, pre-WWII blues and country, African funk from the 70s, sappy 1960s country, classical radio stations listened to while at work, and 78rpm weirdness from around the world. Missing for the most part, for two decades now, has been the one forward-looking musical style that’s helped to define those decades: hip hop. Or “rap”, if you will. I’d like to talk about that a little, since I sense a change coming on.

I was “around”, so to speak, for the birth of this stuff in the late 70s, and I remember walking the entire distance from my house to my friend Ted’s house every morning before 7th grade silently reciting the 15-minute version of the Sugarhill Gang’s “Rapper’s Delight”. My goal was to finish it before I got to his house, and to this day, I can “rap” the entire thing. I can’t remember birthdays nor people at work’s names – but I still know every verse of “Rapper’s Delight”. Not long after this I got really into The Beastie Boys’ “Cookie Puss” and “Rock Hard” when they came out and had the 12” singles of both – man, what are those worth these days? Yet to call me a fan of rap – no one used the term hip-hop then – was a huge stretch. The more “urban” stuff I’d hear around that time, like Kurtis Blow’s “The Breaks” or later in college, LL Cool J or the LA Dream Team – struck me as dumb party rock or entirely alien to my experience, white and solidly middle class-boring as it was. And post-‘84 Beastie Boys still makes my skin crawl.


By the mid-80s I had an allergic reaction to rap, rap culture and everything associated with it. It was getting insanely popular and by the 90s was the dominant “youth music” of not simply the inner city nor of blacks but of young whites as well. There was a part of me that has always had some level of appreciation for this. The never-ending story of black culture informing white culture is well told, and certainly even rocknroll was simply an evolutionary step from music developed in whole by blacks. Watching something so deeply rooted in black vernacular, with its own slang, customs and aura, become the top-selling music of an entire cross-ethnic generation – even informing Hispanic youth culture (the wildly popular Reggaeton of this past decade) – was sorta neat. At the same time, I couldn’t have been further from that world if I tried, and every time I saw a white kid with his pants slung low talking like an inner-city black, I cried just a little bit harder for the future of humanity. For that matter, during the crack epidemic & soaring crime rate of the 90s I conservatively, but likely wrongly, associated many of the pathologies of inner-city blacks with the music that documented them, and had a hard time recoiling from hip hop on that basis alone.

And yet! The three hip-hop acts that I did get into during the past 25 years were all among the most depraved, intense and hardcore of them all. Usually I’d hear this stuff from friends weaned on punk rock, so naturally they’d be attracted – as I am – to the loudest, most ripping hip-hop groups of all. The three acts in question, were/are N.W.A., WU-TANG CLAN and CYPRESS HILL. I’m not sure how much cred the latter has or deserves anymore, but I laughed my ass off the first time I heard “Pigs”, which opens their first CD and is essentially about shooting and then sodomizing cops in prison. It has a patently ridiculous sample that comes from a 1970s soul track from Chuck Cornish, and, if you’ve never heard these guys, features some of the most cartoonish rapping voices of all time. I loved it and still do, and in 1993 bought my first “rap” CD in some time. I do however remember being told  with disdain that Cypress Hill was “rap for white people”, but it’s hard to square these bizarre beats and thuggish lyrics with those coming from the new crop of tame white rappers hitting the charts around this time.

N.W.A. were and continue to be a different matter. “Straight Outta Compton” is truly vile – and is by far the best and most consistent start-to-finish hip-hop album I’ve ever heard. It came out in 1988, when I was completely ignoring rap, and though I frequently read about the controversy surrounding it and the group at the time, I didn’t actually hear the thing for another five or six years. I still laugh out loud when I listen to it. It is stunning on so many levels. You have to be an incredibly talented wordsmith and master of timing and beat to make this sort of intense, violent and horrifically sexist rap work, and if one listens to it at some level of remove (not much of a stretch for this 43-year-old white father from San Jose) you can, and should, take it in as raw humor and unbridled creativity. I was listening to it again this week, and it’s the immediate impetus for this post. Truly a landmark work, duly recognized as such. Such that it is.

Then there was my first hip-hop live show. Well, that’s not entirely true – for some reason I saw GRANDMASTER FLASH & THE FURIOUS FIVE around 1986 or so in Santa Barbara with a bunch of other white college kids – but seeing WU-TANG CLAN in 2000 was a trip for me. To be honest, they were lame. I realized that “live” hip-hop usually consists of rappers trading mics over pre-packaged beats and some live “DJing” – the total antithesis of the intense, all-in live rock experience I was used to. This felt like watching a record get played while people boogied in front of the turntable. Yet I got pretty into the Wu-Tang records, especially the one with “Shame On A Nigga”, still my other favorite hip-hop record of all time.

Yet here’s the thing. Outside of these acts and the more obvious stuff that you can’t help but inhale via airwave osmosis, I really don’t know a whole lot more about good hip-hop. Did I strike the mother lode and find the only acts worth considering in this genre, or, more likely, is there a whole universe of important and obscure hip-hop of this ilk waiting for me and others to discover it? And just what is prompting all this tomfoolery? Well, outside of a random recent listen to the N.W.A. album again, there’s this satellite radio station called BACKSPIN I’ve had the good fortune to listen to in my car the past few weeks. I bought a used car, see, and it comes with 3 months free of Sirius XM radio, so this and the baseball & hockey talk stations are the ones I’ve punched the presets for. They play commercial-free hip hop from the 80s and 90s, a lot of it pretty raw and underground. It helped me get the unsurprising notion that maybe I missed a big 'ol boat by spurning hip hop all these years.


What little I know about hip-hop is this – it often was/(is?) initially created on tapes or in ramshackle studios by the poorest of the poor. It's performed on the street and in tiny clubs, way off the radar of the mainstream. Sometimes, but not always, this stuff finds its way to a bigger audience. Obscurity being my stock in trade across all genres of music, I’m thinking there just might be a gold mine of killer hip hop made over the past twenty years that I didn’t even know existed. I’d love to request your services, via the Hedonist Jive comments box, in letting me know if that is indeed true, and where I might start my search if so.
Posted by Jay H. at 6:00 AM