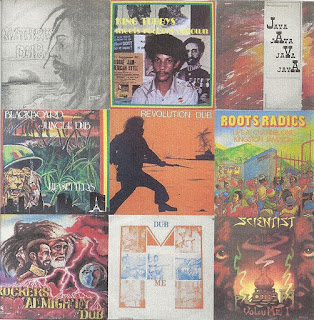 One of my great off-and-on passions is exploring the tripped-out world of 1970s Jamaican dub, and digging as deep as I can into it until I’m convinced I’ve found all the best versions there are to find. My time period is roughly 1973-1980, after which dub increasingly went electronic, or lost its mojo in general. I’ve bought a heaping helping of CDs to help me figure it all out over the years, but I went sort of dormant on this passion a couple years ago and am only now reawakening from my cultural slumber. A capped time period definitely helps matters a lot – I can mark 1980 as the time when dub pioneers like KING TUBBY, SCIENTIST and others ceased being interesting or when they fell off the map entirely. Lucky for all of us, there’s a small legion of crate-diggers out there who continue to find rare 45s and LPs from this time, and who still compile them onto CDs for labels like Blood & Fire, Trojan and Soul Jazz.
BRAIN-ERASING DUB, VOLUME 1 is my attempt to make some sense out of everything that’s sitting in my digital collection right now. I made this CD a couple of years ago, but had yet to foist it upon the world. My favorite kind of “version” is the heavy, echo-laden, trippiest of the trippy. My kind of dub drops vocals out almost entirely and carries a ghostly, almost otherworldly sort of vibe. Cliché, I know – and not always the case with these 23 tracks – but I’m pretty confident that this set is among the best of the best. I wanted you to have it. Just click on the link to download, and let me know what you think. 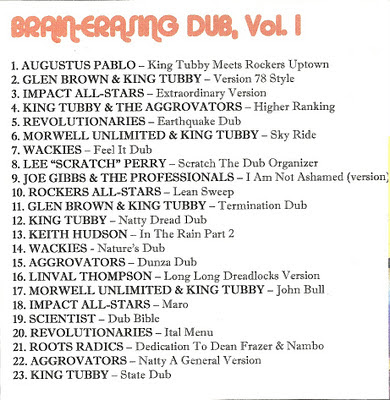 Download BRAIN-ERASING DUB, VOLUME 1
Posted by Jay H. at 9:25 AM