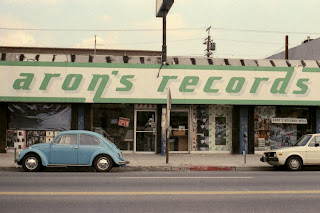 My college tenure was marked by extreme record nerd mania and music immersion of a degree unparalleled outside of that of true obsessive-compulsives and 19-year-old college students. My life at UC-Santa Barbara in California from 1985 to 1989 was defined only partially by my studies and by my friendships – though these are by far the most lasting, memorable and tangential results of those 4 years (not to mention that through these friendships, I met my wife of 13 years). Yet if I’m honest with myself, a far greater portion of my mental space during this time period was instead devoted to my record accumulation, my radio show (“White Trash” on KCSB-FM Santa Barbara), to live music, fanzine buying & reading, “singing” in multiple bands (Umbilical Chords, Sluggo, We Got Power) – and dreaming of the next two-hour trip to Los Angeles, city of angels and record store buying sprees straight from heaven itself.


Those frequent trips down to LA generated a level of excitement totally out of proportion with the end result. Sure, I’d come home with some new records, usually about $20-$25 worth, most of which couldn’t be found in the Santa Barbara area. And yeah, we’d usually see some bands, probably The Lazy Cowgirls at Raji’s or The Anti-Club, or maybe a touring act like the Volcano Suns, Pussy Galore, Naked Raygun, Soul Asylum, Half Japanese, Dinosaur Jr., Das Damen, Sonic Youth and so on. Most of the time was spent on driving freeways, in keeping with the Los Angeles stereotype. My companions for these excursions varied, but were usually some combination of my record-collecting pal Bruce, my record-collecting cousin Doug, various optional parties (Linda, Brian, Brett, Rubin Fiberglass), and myself. We had a routine and a route that we kept to almost religiously. Anticipation built feverishly during the week, and unless we were blowing off school for these trips (which was absolutely the case on a couple of noteworthy days – I’m remembering the free daytime Soul Asylum show at UCLA in ’87), these jaunts were usually on Saturdays. A trip to LA to hit the record stores was certifiably the highlight of my month, and these trips were indeed taken just about every month without fail.
Every record store we visited back then is now gone. All of them. Most record stores everywhere are now gone, and the ones that aren’t will be soon, alas. I started these trips as a 19-year-old with a part-time dishwashing job and a part-time telemarketing job. I owned a 1980 Mustang that fit 4 people very uncomfortably. The route to record dork nirvana went down the 101, through towns like Ventura, Oxnard, Camarillo, Thousand Oaks, and Agoura Hills. A stop at the Calabasas Taco Bell was almost always on the agenda. After this landmark belly-filler, we hit the fabled San Fernando Valley, of “valley girl” and porn fame, and the monthly rapture would begin.
MOBY DISC was a medium-sized used & new record store in the borough of Sherman Oaks, right in the heart of the Valley. Because it was on Ventura Blvd., and therefore not too far from the freeway, it was always a stop on our route despite it bearing the least amount of purchasable vinyl fruit. The only item of note that I ever bought there – that I can remember – was a copy of REDD KROSS’s “Neurotica” about five minutes after it arrived at the store. Bruce & I were big Redd Kross/Red Cross fans, and they hadn’t put out an album of originals since the godhead “Born Innocent” LP. We called ahead to see if Moby Disc were going to get it in that day, which they gruntingly confirmed, and then we basically arrived to nab it as the store was opening, like little girls. I recall the frustration of the owner as we asked him to root around on the loading dock or “in the back” when it wasn’t immediately on display when they took the locks off the doors. They ultimately found a cardboard box of LPs, cut it open, and gave us our prizes. The irony of the whole shebang is that I didn’t like that record at all from the first moment I heard it, and still don’t to this day.
Next we’d head into Hollywood itself and onto Melrose – the home of the hipster/shabby clothing boutiques, candle stores, ironic toy shops – and at least 5 record stores in the late 1980s. VINYL FETISH wasn’t a store we went to all that often, as it tended to focus on goth music and “industrial” beats, and was horrifically overpriced. Same with BLEEKER BOB’S – some amazing old punk records on the wall to gape at, but nothing I could afford. There was a sort of unsung hero used store called SECOND TIME AROUND where I used to find some treasures, usually for $1.99 or $2.99 a pop. It was horribly cluttered, and likely one of those places that was immediately put out of business in the very first years of illegal downloading. The Melrose granddaddy was ARON’S. I loved this store then, and almost as much when it moved over into a space twice this size on Highland Blvd. in the 1990s. Before there was Amoeba Music and its miles of used vinyl, there was Aron’s. I really had to pace myself in this place, as they had all the new stuff from the UK and Australia (I was big into Australian garage punk at the time); all the new SST, Homestead & Touch-n-Go releases; and tons of used vinyl at good prices. I still had two more stores to go. 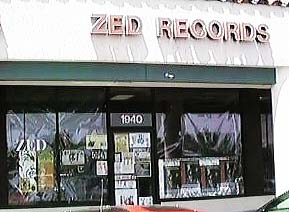 So then it was usually time to hit another Taco Bell before heading down to Long Beach to ZED RECORDS. I think this was about 30-40 minutes away, along the 405 and then the PCH (Pacific Coast Highway), but totally worth the drive. A great, weird, esoteric little store, ZED stocked a ton of 45s, lots of punk stuff, and seemed to cater both to dorks like us and to the more hardcore punker element buying Corrosion of Conformity and GBH records. This was also the era of a term no one uses any more – “speed metal”. In fact metal itself was tremendously popular in the late 80s, as any MTV viewer knew, but this Metallica-inspired speed metal (essentially, metal informed by punk) was h-u-g-e in the underground record stores of ’86-’87. I hated it, as I do now, but I recall ZED being a big gathering place for metalhead burnouts as well. In fact, compared to the bustling, if dusty, Melrose stores in Hollywood, the dark and somewhat ominous Zed Records was a place where one was potentially at risk for a fistfight. At least it felt that way at the time. I found a copy of the first Pussy Galore single there (“Feel Good About Your Body”) a little after their initial 12” EP came out, and I stupidly sold it on eBay years ago, way before its market peaked.
Finally, the trip headed back into LA for the coup de grace – RHINO RECORDS on Westwood Blvd, right over by UCLA. If any money was left after the previous rounds, it surely was blown here. Rhino sold most lightly used records for a mere $3.99 each, and I found crazy things – like all The Flesh Eaters records, or the 1978 “Tooth & Nail” punk compilation – for this price. There was this older (than us) guy Otis whom our friend Eric Stone knew and bought records from, and Otis was renown in collector circles. Long before the internet, Otis would mail out “The Otis list” of mail-order punk records you could buy directly from him, all of which most assuredly came from his used buybacks at Rhino. When I think of the prices then – Crime 45s for $8, “Yes LA” for $30 – it’s almost laughable. I only ordered from him a couple of times, because I didn’t have “that kind of money”. But he worked at Rhino, and he liked to talk vinyl and the Lazy Cowgirls. Totally our kind of guy.
These trips to LA definitely formed my view of the city as a cultural haven, as long as you were willing to look for it. LA’s alterna-culture didn’t hit you over the head the way New York’s or San Francisco’s did, but in a city of 7 million people and nearly 7 million miles to traverse, it was something you had to seek, possibly with the help of an alterna-sherpa. The journey, in a lot of ways, was indeed the destination. I wanted to pound out this blog post now, before I forgot the names of all these stores, and also as a tribute to the last record stores still standing in 2011, all of which are undoubtedly doomed. May you thrill the hearts of socially inept teenage & twentysomething music accumulators for the rest of your days.
Posted by Jay H. at 6:00 AM