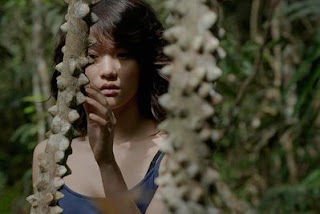 Every year my wife & I buy tickets to at least 2-4 different films at the San Francisco International Film Festival - almost without fail foreign films we'd never see otherwise - and yet we usually only hit about .300 when it comes to hit/fail ratio. That's great for ballplayers, pretty soul-crushing when you're paying a babysitter for a big night out, time and again, year after year. So watching Pen-ek Ratanaruang's creeped-out 2009 Thai film "NYMPH" last night, and being just shy of blown away by it, was a pretty joyous event. Let's talk about it. And oh yeah, welcome to my new blog, which I'm keeping low-profile for now as I define just what it is I want to do with it.
"NYMPH" is one of those films where you need to sit on your hands and accept that you won't really know what's going on, but will be still questioning in your head for hours afterward. There's a plot, sort of, but really the movie is 90 minutes of constant foreboding and dread, punctuated by amazing cinematography, an ominous (but perfect) musical score, and strange flashes of horror, sexual tension and utter confusion. It concerns an adulterous woman named May married to a bohemian photographer named Nop. Both go on a camping trip that leads Nop to essentially lose himself both literally and spiritually in the jungle-like woods, at the foot of a mysterious giant tree that he tries to embrace and quite literally make love to. (This after being sexually spurned, for what appears to be the billionth time, by May). He comes back, eventually, but things aren't quite the same to put it mildly - even though for a good 20 minutes one believes they will be, despite strange bloody happenings in the jungle/woods.

I'm the guy who falls asleep during subtitled films on Friday nights, no matter how much we're paying the babysitter nor how much I've been wanting to see a particular film. This one kept me absolutely riveted, puzzled and - oh, OK - fully pumped with scared adrenaline as I waited for things to pop out of the screen and tear the protagonists apart. "NYMPH" can be enjoyed on multiple levels - as a piece of spiritual theater; as a bizarre horror film; as a commentary on decaying marriage; as a film dork's perfect storm of image & sound; and as a good old-fashioned mind-flayer. I recommend it without reservation to the adventurous filmgoer.
Posted by Jay H. at 1:18 PM