My three favorite musical releases of this new decade so far share the distinction of all sporting females in a leading role – either as frontwoman and prime mover, or as part of a greater whole of a band made up entirely of the fairer sex. I also bought all three on iTunes with real virtual cash money. Illegal file-sharing and physical musical goods purchases are totally last decade, right? All three belong to an underground well of throwback rock and roll of various forms; then again, “throwback rock and roll” comes straight outta the department of redundancy department. I’ll walk you through each of these releases, try to get you psyched beyond belief, and then provide you with a convenient link for purchase. 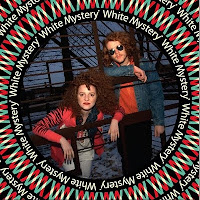 I’ve been solidly in MISS ALEX WHITE’s corner ever since I first heard her dusky, bluesified soul mama voice belting out punk rock tunes behind acres of guitar screech several years back. She’s worked her magic in the Hot Machines, Miss Alex White & The Red Orchestra, Candy Apple Killings and now WHITE MYSTERY, a duo with her equally fire-tressed brother Francis, and the two must cut quite a sight kicking out the jams together, orange locks flapping hither and yon. This 14-song LP/CD clocks in at about 27 minutes by my count, and they’re melted the majority of the two-minute scorchers together like a “Stars on 45” medley of high-energy distortion. It’s a great record top to bottom. Miss White’s taking a page from the heaviest, dirtiest 60s revival bands that came out 20 years later – THE MORLOCKS spring immediately to mind – and when her guitar’s not set to fuzz-stun, it’s tuned to a sort of reverbed-out jangle that one hears in the best of the 1966 teen garage bands. Francis White’s a total animal on the skins, too, and his pounding adds a real chaotic layer to his sister’s steady singing, which navigates a successful middle ground between “crooning” and “belting”. Going to be hard to keep this one off the shuffler the next few months. Buy it on iTunes.
DUM DUM GIRLS – “I Will Be” 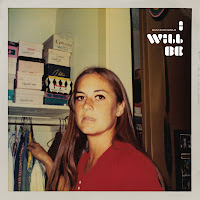 This new LA band and their label, Sub Pop, leaked their retro-pop song “Jail La La” before this was released and that was all she wrote. “I Will Be” became my most eagerly-awaited record of the year, and when it hit and was promptly ingested last month, my enthusiasm never flagged. Better and more well-rounded that her early 45s (until recently the DUM DUM GIRLS were more or less a solo act of one Kristen Gundred), “I Will Be” mashes classic girl group moves onto a super low-fidelity recording ethos, then speeds up the tapes so the whole thing moves like a harmonic fireball. People flipped out about that band The Vivian Girls, but I’ve yet to hear a single song they’ve created that matches even the worst one on this disc. The Dum Dum Girls won’t get famous off of it – too gutter-seeking and raw to really become worldwide indie darlings, I believe – but I’ll definitely be signing myself up for Dum Dum Girls Army when they send out the form letter. Buy it on iTunes.
YELLOW FEVER – “Yellow Fever” 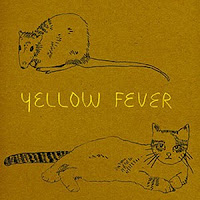 Finally, from Austin comes a duo whom I discovered via the digital baited hook of free mp3 downloads. They appear to be a 2-gal, 1-guy outfit – a ”trio”, I believe you call them – and while they’re no rote UK DIY throwback, there are definite John Peel show elements going on here, if you know what I mean. Sparse, minimal and free of window dressing, YELLOW FEVER play a sort of chiming, bass-driven churn that sticks one foot into the twee, harmonizing 60s and another into a foggy 1979 murk characteristic of low-budget UK bedroom 45s. This excellent CD collects their recordings starting from 2006, as I understand it, and takes us up to the current day in 2010 – so at a mere 11 songs, it’s a level of quality control that must be applauded. Tracks like “Donald” and “Metarie” are pure pop gems and among the half of “buoyant” songs on the disc, songs that complement the quieter, more contemplative numbers like “Culver City”. This deserves a wide audience and I hope they get on the Pony Express & hightail it to California so I can see ‘em live. Buy it on iTunes.
Posted by Jay H. at 6:00 AM