OMG THAT BURRITO WAS AMAZING 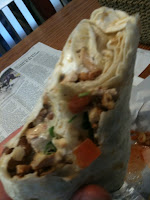 My wife’s now got a subscription of SUNSET magazine coming to our house – yeah, the same Sunset magazine I was sooo embarrassed to have in my parents’ house when I was a kid. Backyard gardening, beach vacations, wicker furniture – and WAITTAMINUTE – “The Hunt For The Best Burrito”?? “Food writer Jan Newberry travels up and down California to find out who makes the best burrito”!!?!. Now that’s my kind of must-read journalism. The magazine hadn’t left the postman’s fingertips for five minutes before I’d devoured Newberry’s article, and had a new list of taquerias – that’s what we correctly call them here in Northern California - to conquer. And while Newberry did give voice to the oft-hashed out Northern vs. Southern California burrito debate/firestorm, in my eyes it’s not even a contest. Refried beans my ass. Northern California - more specifically, the San Francisco Bay Area – even more specifically, the taquerias of the Inner Mission District in San Francisco, from roughly 16th through 30th Street – makes some of the world’s greatest sub-$6 meals, and they’re so far above and beyond those wussy, stomach-churning cheesy frijole cylinders they call “burritos” in LA and San Diego that it’s like comparing filet mignon to rump roast. 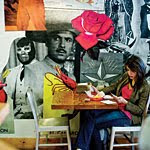 So anyway, Newberry raved in particular about a place called LA CALLE ASADERO in downtown Oakland. I looked it up, and I’ve probably driven by it a hundred times without noticing it. “Prettiest burrito place I’ve ever been to”, she said, and check it out – the table pictured here is the exact same one I parked my burrito-lovin’ carcass at. Their Burrito Gringo (hey, if the shoe fits..) with pollo asado was everything I’d hoped for and more. WOW. What was the secret sauce? Well, the easiest way to unpack the vagaries of a given burrito are to highlight its subtle differences from the mean. In La Calle Asadero’s case, they slap the flour tortilla on the grill first, instead of steaming it. Yeah, I know a lot of folks do that, but theirs somehow seemed to have a lot more heft and crunch to it, which still being “supple” and “flexible”. Sexy, right?

They also throw in a total curveball among the big juicy pintos and the perfectly melted cheese: red onion. That’s right, I said red onion. Fresh and packed with flavor, like it was grown in the garden plot out the back exit and sliced right as I was coming in the door. Oh – and there’s this: fresh tomato. Not watery chunks, but meaty squares obviously chopped with the sharpest of knives. Put it all together, and I’ve got a new favorite burrito to nearly supplant the firm hold PAPALOTE in San Francisco has had on my burrito-buying wallet the past decade.
Posted by Jay H. at 3:03 PM