KFJC, APRIL FOOL’S DAY AND THE “MONTH OF MAYHEM” 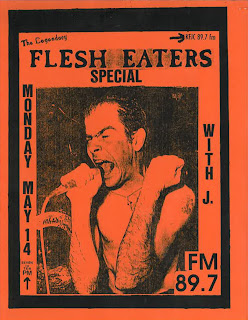 I spent large chunks of my junior high and high school experience circa 1981-85 alone in my bedroom, awash in the sounds of an life-changing college radio station from Los Altos Hills, California called KFJC coming out of my clock radio. I had previously been a young music freak who tuned into America’s Top 40 every Sunday, as well as a budding “new waver” discovering Devo, The B-52s and Adam and the Ants; and to some extent, I remained (and possibly still remain) something of a new waver. Through KFJC, and through KPFA’s “Maximum Rock and Roll Radio Show”, I discovered punk rock, which was then in the throes of branching into its full-on, light-speed hardcore phase. I discovered English DIY and dark/gothy stuff, and some early favorites of mine were Siouxsie & The Banshees, Bauhaus, The Delta 5 and the Au Pairs. The station helped turn me from a music fan into a music obsessive, and to think that I’d be joining my DJ idols there in a few years was unfathomable at the time.

After four years DJing in college at KCSB in Santa Barbara, I moved back to the San Francisco Bay Area in 1989 with enough confidence to approach my formative heroes at KFJC with a proposal for my own show. It wasn’t that difficult – after a few weeks of toil in the 2-6am time slot, I landed first a decent morning show and then a fantastic Monday night gig from 6-10pm. KFJC was among the most creative of radio stations, drawing upon yearly traditions started by long-retired DJs. Two of their best traditions, both of which continue to this day, are the annual “format change” on April Fool’s Day and the subsequent “Month of Mayhem”, where DJs put together hours-long overviews of particular artists, neglected genres of music, and all manner of musical ephemera, strung together in a manner not conducive for a typical radio slot.

April Fool’s was always a blast, and I remember being a stung listener several times during my teenage years when I forgot what day it was. There was the time that the format change was reduced to a rotation of only six songs, played back-to-back in sets, then started over again – an exaggerated version of some awful Top 40 station programmed by a corporation. Except the two songs I remember from this particular day of mirth were pretty cool - “Start!” by The Jam and “Watching The Detectives” by Elvis Costello – placing it around 1982 or so. There was another time where the format changed to all reggae, and all the DJs talked in a bogus Jamaican patois. More recently, KFJC switched frequencies with New Jersey’s WFMU for the day, which must have been absolutely baffling for listeners on both coasts.

In my brief time at KFJC from 1989-1990, I got in on one April Fool’s day. We decided to change the station’s format on 4/1/1990 to an “oldies” station, except the oldies here would be alternative/college rock songs that were no more than ten years old. I got a key slot on Sunday night from 6-9pm this particular day, taking the place of a wacked-out radical left/conspiracy theory show hosted by a guy named Dave Emory. (I believe this show was later syndicated, though Emory worked out of our Los Altos Hills studio). I totally hammed up the format, announcing in my most weasely of milquetoast DJ voices after a song would end, “Ohhhh yeah, don’t that just make you feel so GOOD hearing that again? Going allllllllllll the way back to 1984, that was a real golden classic from the Meat Puppets”.

Then I’d do a fake “traffic report”, where I’d spin a sound effects record of a helicopter in the air and then play a pre-recorded tape we’d made of some phony, deliberately wrong traffic update. It would start off talking about local freeways (“problems in the MacArthur Maze, heavy backup at the Bay Bridge, metering lights are on”), and then would segue matter-of-factly into Los Angeles freeways that were seven hours away from us (“Injury-accident on the 405”) – keeping in mind, of course, that it was Sunday night at 7pm and there was likely no one on any freeways.

The best part of this particular prank was that I got to make up new time slots for all the popular DJs our new format was displacing. I acted like this was now my new slot, and that these were the songs I was going to play every week in this slot. I then would announce stuff in my stupid hack DJ voice like, “Don’t worry, Dave Emory fans, Dave’s still got a home on KFJC. You can now catch his show each and every Sunday morning from 4:45-5am, only here on ‘The Wave of The West’”. I invented new slots for every show that day, all at preposterous times like 1:30-2am and the like – and then the calls started coming in. The lines just lit up like a Christmas tree after the “Emory timeslot change”. And then I realized how unhinged some of Emory’s listeners were. They called me one after the other, totally freaked out, asking for clarification, begging KFJC to reconsider, completely not in on the joke.

This went on for about an hour before I got a call from Emory himself, who told me I needed to cut it out for my own safety – “You don’t know how dangerous some of these people can be – they’ll come down to the station”. Based on my previous calls that hour from modern-day birther types (the big controversies/obsessions of the day were Reagan’s “October Surprise” and still, 27 years later, JFK’s assassination). I decided he was probably right, and cut this part of my shtick as my show was winding down. Of course, the station reverted to its normal free-form format the next morning.

I also only got one “Month of Mayhem” special in, because I quit the station in July 1990, fed up with the depressed, insular frathouse of lost souls that seemed to make up station personnel. Oh – that, and the commute from my new apartment in San Francisco. Yet I did get to do a three-hour special on THE FLESH EATERS, no mean feat when the band only put out four forty-minute albums in the 1980s and one single in 1978, and whom I never saw live and only heard for the first time a year after they’d broken up. My four years in college in the late 80s, however, turned me into a rabid, posthumously worshipping fan of the band and their genius singer, Chris Desjardins, who I was by then seeing play in his new bands The Divine Horsemen and Stone By Stone.

At that point in my life The Flesh Eaters were easily “my favorite band of all time”. When I conceived of doing this special back in March 1990, I wrote a letter to Chris D (we didn’t have email back then, you kids) and asked him if I could interview him on the show. I gave him my work phone number so we could work out the details (we didn’t have cell phones back then, you kids). Well, two months went by and I’d heard nothing from him, and figured that the lack of interest from him was in keeping with his publicity-shy, disinterested persona.

One hour before I was to leave my job at Monster Cable and drive down to KFJC and do the special, I got a call on my work line, and whoa - it was Chris D himself. He’d love to do an interview. Uhhh…..OK. So I hustled down to the station, corralled an engineer to help me figure out how to patch him in, took Chris’s call live on the air, and proceeded to do what I remember as the most botched, hurried, unprepared, nervous interview I’ve ever done – with my idol, no less. And of course – I didn’t tape it, so there’s no historical record for me to check and assure myself that “it wasn’t so bad after all”. In my mind it was a friggin’ disaster – but Chris DID break the news on our call that he was re-forming the Flesh Eaters that year, which was totally exciting until I realized that all it meant was that he had a new band put together, and he just slapped on his old, more reknown band’s name on top of it. (As it turned out, this new Flesh Eaters were actually really good for a few years, and played live and recorded albums up into the 21st Century).

When I quit the station in shame and disgust on July 4th, 1990, I remember driving back to San Francisco, straight to a FLIPPER reunion show at the Covered Wagon Saloon, totally angry and bummed about the circumstances surrounding my decision. I drank fairly heavily at the club. That day I’d done my final show, and as it turned out, it was my final show anywhere as a behind-the-glass, guy with 2-3 turntables disk jockey. To this day I still have anxiety dreams where the song on Turntable 1 is about to end, and there’s nothing queued up on Turntable 2 – and gasp – we’re about to have some “dead air”!!! I still love KFJC and the ethos behind KFJC, and there’s a whole new generation at the station now who are keeping it among America’s most vital musical institutions. Sometimes I still wish I was there, just so I could cook up more pranks and Month of Mayhem musical OCD specials – then I wonder if anyone even listens to the radio at all anymore. Anyway, that’s enough blog reminiscing for now. If anyone taped that May 14th, 1990 KFJC Flesh Eaters special - or the April 1st, 1990 6-9pm show - please do get in touch.
Posted by Jay H. at 6:00 AM