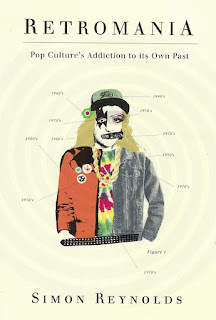 Unpacking my thoughts about this book could really eat up some time and space if I let it, so I'll do my best to stay concise. Long story short, Simon Reynolds' new book "RETROMANIA" is imperfect and flawed in a few key areas, and yet at times I felt like it was written just for me and my "ilk". It concerns itself with 21st century culture's, particularly musical culture's, incessant need to look backward for inspiration. Both underground and mainstream culture have run out of original ideas, the argument goes, and are aimlessly jumping from inspiration to inspiration and to literal and shameless borrowing from the past. Anyone past the age of 40 - as I am - can probably relate. As the book does a marginally good job of showing, people have also been complaining about quote-unquote retromania for about fifty years now, with nearly as much credibility as we ourselves have now.

The author, whose music writings I've been moderately acquainted with for a while with a mix of admiration and repulsion - the latter mostly because our tastes don't line up synchronously and therefore he's not to be trusted (!) - wrote a really good book about late 70s/early 80s post-punk, on which I too was weaned, called "RIP IT UP AND START AGAIN" and which I reviewed on an old blog right here. He's not only an even better writer now, he's done a good job keeping himself current both musically and culturally. In the first half of the book, he covered two topics very near and dear to my heart - the culture of record (LP/45) collecting, and the transformative changes the Internet has bestowed on the way we consume music. There are several chapters on these subjects, both of which are quite obviously almost mutually exclusive. In fact, Reynolds evinces quite a bit of retro nostalgia himself for the solitary pursuit of record accumulation, which was also a huge part of my life from about age 13 all the way until about 33. I know exactly what he means about what is now being lost in the digital age, and I also love that he appreciates very well what's being gained - which, on balance, is better for just about everyone except for grumbling audiophiles and newly-unemployed music industry executives.

The first half of "RETROMANIA" flits around these topics and others so well, gliding disparate concepts into and out of each other with ease, that I felt like I was finally reading the first tome that finally synthesized what digitization is doing to music consumption in a way that felt real and true, instead of a year or two behind the times or like futurebabble. Alas, that's not really what this book is about - which is why I was sort of surprised to be loving the book as much as I was. Around midway and especially into the last third, it's almost like Reynolds rediscovers his thesis - "we have run out of ideas" - and then looks to various subcultures (fashion, musique concrete, even film) to try and fit this all into a unified whole. It comes off as awkward at times, and there are chapters that just don't add a whole lot except to make Reynolds look like a guy grasping at connections that may or may not be there.

It almost reads like a collection of essays that someone decided needed to be anthologized in a book, and tied together by hook or crook. I'm fairly certain that's not what this is, and that Reynolds definitely had his theme developed before his editors did. So let's blame the editors for making it come across as ham-handed at times. That said, I'm really happy I read this. He really captures the zeitgeist of the time and of certain subsets of individuals, myself included - and I don't think his "retromania" thesis is at all wrong or even something we shouldn't worry about a little. Reynolds, far from bemoaning laziness on the part of content creators, instead points a strong light at cultural and technological forces that have made this current state of stasis so. I believe him, But of course I would - I'm a nostalgia-drenched fortysomething dad, right?
Posted by Jay H. at 11:00 AM