YEP, IT'S A HEDONIST JIVE TUMBLR 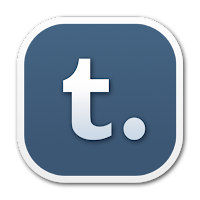 Life is complex. The last thing you need is another blog stinking up your RSS reader. Yet you may have an appetite for content & information that fits neatly and squarely in between - oh I don't know - the Hedonist Jive 140-character Twitter account and the Hedonist Jive "long form" blog. Right, I hear you - when did the friggin' blog become long-form content? Well, for a lot of our brethren and sistren out there, it has. That's why some enterprising twentysomething came up with this TUMBLR idea, which can be equated to a longer Twitter or a shorter blog. For those of us with lots of things to "say" or publish, but not enough time in which to say or publish them, I have to admit, it's a pretty good idea. You can even write your posts on your phone, add photos, add audio files and then some. It's a platform I thought I'd experiment with, starting right about now. Thus, the HEDONIST JIVE TUMBLR.

I have had to actively coach myself this past year to complement my incessant online activity by reading more long-form content, as I did - as we all did - for years. This includes a stepped-up effort to read even more books, which I've been reviewing here these past couple of years, and long-form magazine articles, which I've always read and which I'm reading even more of thanks to INSTAPAPER, the greatest smartphone & tablet app not called Spotify or MLB At Bat. There's still a need for the pithy soundbite and the quickly-shared photo or mp3, though. I think this Tumblr thing will make a decent place for me to throw all asides and bon mots that I don't quite feel like covering in "medium-form" glory here at the main blog. And it actually renders well on your internet-enabled phone, too. (I'm going to assume you have one of those unless you're still rocking a StarTac - but if you are I'm going to start calling you "Bob Dole").

So have a look at The Hedonist Jive Tumblr, and maybe bookmark it if you think it might add some value to your media-consumin' life. And maybe subscribe to the Hedonist Jive Twitter while you're at it. Our online media empire is expanding. Next stop - printzine. Don't laugh.
Posted by Jay H. at 8:26 PM