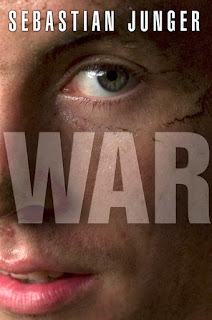 One could pretty much read quality books about war, and only war, for a lifetime and still feel they'd still missed out on some classics. For those of you like me who are dilettantes in the field of first-person accounts of war on the front lines, don't make the mistake of passing up this amazing work of journalism simply because it's entitled a mere "WAR", and because it deals with recent nonsensical fighting in Afghanistan and not on epic, defining battles along the Western Front. This account by Sebastian Junger of his time embedded with an American infantry platoon in Afghanistan's Korengal Valley - the hottest flashpoint in the entire deadly, crazed battle with the Taliban - is as well-written as any military account I've read, right up there with Anthony Beevor's "Stalingrad" (which is actually a work of history) and Tim O'Brien's semi-nonfictional "The Things They Carried". Except this is better, and cuts more closely to the bone. If you've ever wondered why some men are driven to be soldiers, why they will die for the men around them and take ludicrous risks to save their friends instead of themselves, this is an essential read.

Sebastian Junger is fairly well-known for his gonzoid journalism in the lines of battle with firefighters, seamen at storm and other testosterone-laden subjects. Junger is obviously the rare sort of man up for the challenge of spending multiple months getting shot at and going on shoot-to-kill missions with a platoon in the name of a good story and a film ("RESTREPO", a terrific documentary that Hedonist Jive reviewed right here). All well and good - but the man can write like you wouldn't believe. His perspective ranges from quote-perfect descriptions of the boredom and intense camaraderie of the men he's with to meditations on the internal machinations of man when confronted with possible or near-certain death. When he hits upon a particular topic - how cortisol contributes to fighting ability, say, or how men block out the external narrative of "the war" in favor of the WAR they're actually fighting - he goes on some pretty big riffs to get to what he believes are essential truths. It's hard not to believe that they are when you're done with said riffs, backed as they are by words straight from the mouths of soldiers and even from clinical, scientific research.

This is not a book about whether or not it's right to fight the war in Afghanistan, nor about anything happening outside the Korengal Valley - unless it's about how weird it was for the men of the Second Platoon to go back to the United States when their tours of duty were up. Many signed up for new tours, just so they could feel the adrenaline-rush intensity that comes from nothing but combat. Remember that soon-to-be-cliched scene at the end of "The Hurt Locker", in which Jeremy Renner's character suffers from total cognitive dissonance at an American supermarkets after his wacked-out, exceptionally violent time in Iraq? There's a lot of discussion of similar feelings among combat personnel in this book, and about how firefights & screaming, violent combat is especially well-matched to the phisiologies of 19-25-year-old men in top physical condition.

The notion of "brotherhood", so easily mocked when put into the wrong hands - say, a politician's - is made into something so respectful and understandable in this book that I actually dropped my jaw at times in a newfound respect for humanity. It turns out that we as people have an innate empathy for our fellow man that in certain circumstances can override even our love for ourselves. Yeah, like I said - this is a book that hits on some pretty deep truths, all in the service of painting a vivid picture of men in combat, thousands of miles from you & me and doing this every day and night while we do whatever it is we do. "WAR" is an exceptional book, and I'm happy it's only my first at what I'm sure will be many books read by Sebastian Junger.
Posted by Jay H. at 5:20 PM