THE EPHEMERAL NATURE OF THE BLOG; OR, MY BACK PAGES 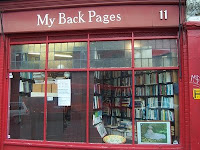 I linked to an article the other day from this past Sunday's New York Times on print fanzines. There were a couple of crusty curmudgeons in there bemoaning the fact that blogs and social media - the primary form of non-professional expression on the web - simply replace one piece of content with another, over and over, ad nauseum until the old stuff is totally gone. It's not gone, per se - my Byron Coley post from last June is the most popular thing I've even written on this blog, racking up hits like crazy from god-knows-where - but if no one links to it, and no one searches for it, then it's gone.

Vainly, there are certain things I've posted on The Hedonist Jive that I don't want to be gone. They're just blog posts, to be sure, but they're my blog posts, and if I don't link to 'em, at this point no one else will either. So have a look! Here are some of our greatest hits the past two years.

SUPERDOPE #5 (a scan of my early 90s print fanzine, with links to the other four issues I've scanned as well)
BOW TO THE iPHONE, YOUR NEW MASTER
SCENES FROM 1982 CHINA
"BLANK CITY"
OF CURD NERDS & CHEESE DORKS
IN PRAISE OF THE G CHANNEL
"BLACK SWAN"
1991 OLDSMOBILE COMMERCIAL TRYOUTS
IF YOU'RE LOOKING AT ME, YOU'RE LOOKING AT COUNTRY
"CYRUS"
THE STORY OF HELEVATOR, SAN FRANCISCO ROCK GROUP
"BIG FAN" - TAXI DRIVER FOR OUR TIMES
THE GREATEST 20-MINUTE ROCK SONG OF ALL TIME
KFJC, APRIL FOOL'S DAY & THE "MONTH OF MAYHEM"
"NYMPH" - A SUPERNATURAL BRAIN-ERASER
GRANDMA'S POSTCARDS 1
GRANDMA'S POSTCARDS 2
GRANDMA'S POSTCARDS - SAN FRANCISCO EDITION
IF I WERE A JUGGALO
THE HEDONIST JIVE GUIDE TO BASEBALL PLAYERS