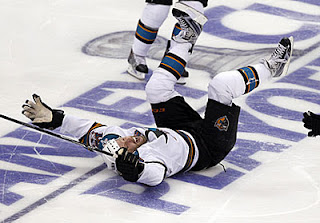 When we talk about sports around here at the ‘Jive, which is not too often – but when we do, we’re usually talking baseball. Baseball season is by no means over, but I’d be doing you & the world a big disservice if I didn’t at least remind you that the other great North American team sport, the National Hockey League, is starting up again the day after tomorrow. That would be Thursday 10/6. No labor strife, and no big controversies this offseason except for a huge focus on aggressive hits and head injuries. Sidney Crosby, arguably the “face” of the NHL to the non-hockey world, is still suffering from post-concussion after-effects and won’t be playing this weekend. Brendan Shanahan, former Detroit Red Wings star & now the league’s rule enforcer & disciplinarian, is suspending players left & right over over-aggressive face-washes & body-spindling during the preseason. Lots of ensuing chatter. I can't pretend to care. Let’s play some hockey.

I haven’t made NHL predications in some time, in at least six/seven years, and I was of course dead wrong in public then as I often am in these matters. (I thought it especially awesome that the 2 teams I picked to play each other in the 2011 MLB World Series, Atlanta & Boston, each went into free-fall during September and were ignominiously eliminated on the last day of the season). I’ve been doing my homework this NHL off-season, however, and I’m feeling pretty good about these picks. I’ve been reading Backhand Shelf, Houses of The Hockey, Puck Daddy, Hockey News and ESPN’s NHLpage – have even been listening to XM’s NHL Home Ice and a few podcasts (!) – so this is pretty scientific right here. Let’s talk again about the results in April and we’ll see if my San Jose Sharks actually did finally shrug off their curse and get it done for Lord Stanley this time. Here goes:


Some commentary: None of this really upsets too much of the conventional wisdom. I have a hunch that exciting times are due to visit Toronto after a long absence and that the Maple Leafs will finally make the playoffs & have a nice run. The other big surprise team – well, not to some folks – will be the Nashville Predators. Blessed with an amazing goalie (Pekke Rinne), an incredible defensive corps (Shea Weber & other brutes) and just enough scoring, they’ll achieve great things in front of not too many fans in that hockey hotbed of Nashville, Tennessee. The San Jose Sharks, though, have really got an incredibly balanced team across the board. They’ve been knocking at the door of this thing for so long, and just because they’re “my team” and in my backyard, I can’t ignore the fact that they’re totally loaded and ready to go off.

I’m also excited to see a few teams start to turn it around – St. Louis, the NY Islanders and the New Jersey Devils, who all had pretty weak 2010-11 seasons. And those Washington Capitals are a blast to watch – fast, loose and possessing the most exciting player of the decade, Alex Ovetchkin. I’m confident he’ll at least make it to the Cup this year given the supporting cast they’ve built around him, including goaltender Tomas Vokoun, who’s poised for a bounceback year. And Vancouver? Good enough to rack up the points in the regular season for sure - not tough enough to make it happen this year in the playoffs. Keep waiting, Vancouver - and try not to set anything on fire this year.
Grab a Labatt’s and start growing out your playoff beard as I am – should be a wild season, eh?
Posted by Jay H. at 5:44 PM