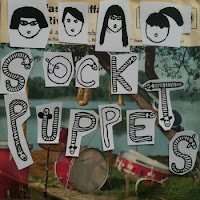 In the mood for some ruff Danish girl garage pop? Maybe not this morning – but perhaps later this afternoon? Well then have I got a band for you. I discovered Copenhagen’s SOCK PUPPETS on someone’s 8Tracks mix & then followed them down the internet rabbit hole for a while. At the end of it, I’d ordered their 4-song CD-EP from Odd Box Records because I was just so smitten & stuff. Their EP whips by in less than eight minutes, and if the stars align the way I expect them to, the folks over at Slumberland are probably already taking them out for crumpets & readying a big signing bonus. At least they should be.

The band roll-calls many of their heroes on their MySpace page – calling out just a few, like Aislers Set, The Vaselines and Pussy Galore, should give you a pretty good sense of how the band combines noise, feedback and really sweet pop hooks to make something they call their own. The songs are so insanely catchy that it was a goddamn teenage dance party in my car as I played the four songs over & over on the way to work this morning. This is barely one step above self-released stuff, so if they’re this good when they’re barely off the ground, let’s hope these young lasses can continue this rambunctiousness well into their twenties.
Download SOCK PUPPETS – “I Blame Gravity”
Download SOCK PUPPETS – “Summer Jacket”
Posted by Jay H. at 9:19 AM