“OF TIME AND THE CITY” 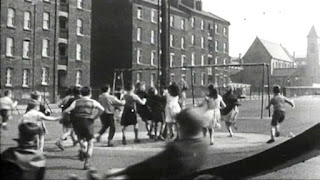 I watched this 2009 film from Terence Davies over the weekend after seeing it land on all sorts of best-of lists & generate the sort of must-see hyperbole that usually prods me to action. “OF TIME AND THE CITY” is about a city I’ve never been to – Liverpool, England – and the era in which Davies grew up, roughly centered around the 1950s. It is elegiac and poetic, both literally and figuratively. Davies doesn’t so much narrate this film as recite a series of classic poems, disembodied hymns that may or not be his own words, and a series of nostalgia-tinged recollections about his childhood and the deep sense of loss associated with growing up and losing one’s innocence.

I had actually hoped for something a little different, something that would get to the root of this working-class industrial city and its place in Greater Britain, but “Of Time And The City” is not that kind of documentary film. Using a huge treasure trove of newsreel, documentary and found footage, Davies assembles what’s been called a “cinematic essay”, and yes, it’s definitely about Liverpool, but it’s mostly about Davies and his personal loss and regrets. He regrets being raised devoutly Catholic, and all the “wasted hours” spent in church. The film of course slathers reams of scary, imposing, black-and-white Catholic iconography upon the viewer. He’s gay, and there’s regret for having to live said life in the shadows for many of his years. Mostly he regrets the modernization of his city and the normal churn of history, and to his credit, he doesn’t lash out like a luddite, he simply misses the more simple times. And let me be clear – there’s a lot that must be visually inferred from this film – Davies doesn’t exactly jabber through the whole thing. There are long stretches with just images and music, music and images, and it makes for a compelling, if unusual bit of cinema. I get what the critics were talking about, and if you like your documentaries served with a heaping side of melancholy, this might be the film for you.
Posted by Jay H. at 5:00 AM