BEER SPELUNKING ALONG THE OREGON TRAIL 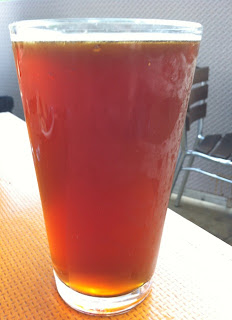 Just returned from 8 nights in Oregon and Xtreme Northern California and that's why it's been a little quiet around here of late. We traveled up to Bend, Oregon in search of sun, and got a ton of it - and also decided in short order that Bend's easily one of the most beautiful towns in the US, with tons to do outside, great food, zero crime, clean livin'- and yeah: the largest concentration of breweries per capita in the United States. Seven - seven for a town of 80,000. One of them you've heard of - DESCHUTES BREWING - and I'll be reporting on my experiences there later. I did a lot of other beer exploration on this jaunt, and figured you'd be wanting a "scene report" right about now. Onward!
STANDING STONE AMBER - Leading off with this one simply because it's the best photo I snapped....and the final beer I enjoyed on the trip. Moreover, it broke a streak of five IPA's in a row. We stopped at this longtime (1996) brewery in Ashland for dinner, and not only was the food fantastic (I had the tempeh stir-fry after 7 nights of burgers, pizza and whatnot), so was this seemingly simply amber ale. Fresh-tasting beyond belief, with light caramel malts and a faint heavy fruit taste. Easily one of the best ambers I've had in a long time. 8/10.

CASCADE LAKES IPA - This brewery was a mere 3 miles from where we were staying in Bend. Their IPA is a great pine bomb, really hoppy and carbonated, with loads of bitter aftertaste and tongue-buzzing going on. They didn't label it a "double" (it is 90 IBUs) but that's sure what it felt like. Loved it. 8/10.

LAURELWOOD WORKHORSE INDIA PALE ALE - Whoa, really bitter, one that actually took some getting used to. Chalky (in a good way), cloudy, piney and way-strong. This is a Portland brewer and I picked up a bomber of this at a hippie grocery store in Bend for $3.99. Totally got "groovin'" with it after it harshed my mellow a little at first. 7.5/10.

10 BARREL S1NIST0R BLACK ALE - Apparently 10 BARREL are the newest of Bend's 7 breweries, and they make a fairly decent "black ale". Not quite a porter; malty and light and easy to drink, with a distant whiff of the cocoa plant. 6.5/10.

SILVER MOON HOP KNOB - Read something about this being an "English IPA" or a "light IPA" - no friggin' way. Sure, it’s “only” 40 IBUs and 5.7% alcohol, but it tastes way stronger on both counts. Creamy, with light citrus taste dominating over the malts. A really good bitter IPA from another small Bend brewer. 7/10.

TERMINAL GRAVITY IPA - Finally, the winner of the trip. TERMINAL GRAVITY brew out of Enterprise, OR, and this IPA popped up everywhere we went in Central Oregon. The kids obviously love it, and so do I. Big, bold fruit-forward IPA with medium hops. Nice “fermented” taste – a real beer lover’s beer that can also be relished by the hoi polloi. 8.5/10.

This is a wonderful town that’s worth a trip in & of itself, even if you’re teetotaling. Some of the most majestic scenery I’ve ever come across – Crater Lake, Mt. Bachelor, Skaggs Lake, whitewater rafting down the Deschutes River & more. And if you like white people, man, is Bend the town for you (this is something the locals are a little embarrassed about – easily the least diverse city I’ve ever been to). We’ve decided to make it part of our vacation rotation every couple of years, a decision made only in small part because of the breweries. I’ll tell you about the Deschutes Brewing visit next time.
Posted by Jay H. at 10:56 AM