A TRIP TO DESCHUTES BREWING 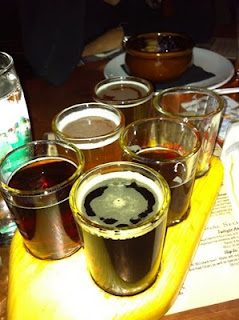 Well, let’s be technically accurate. I could have toured the DESCHUTES BREWING facility in Bend, Oregon – I drove right by during touring hours. But then I would have had to look at kettles and tanks and lackeys mashing the wort, when all I really care about is drinking the product. You scientist/brewing types who dig that sort of thing – well, bless ya. You make my hobby/vice what it is. But no, I went to the “DESCHUTES BREWERY & PUBLIC HOUSE”, which was the original home of the brewery in 1988 and is now a restaurant and pub. It was something that was an absolute must on our vacation to Bend, and my wife and son were kind enough to accompany me as I got busy with their beer.
Had I been left to my own devices, I would have done some real damage here. In the late 90s, their BLACK BUTTE PORTER was one of my go-to beers, along with MIRROR POND PALE ALE. Now, as then, those are their flagships, but they’re still a very renown brewer among beer dorks thanks to limited, seasonal, high-alcohol masterpieces like THE ABYSS and MIRROR MIRROR. My friend Erica, who lived in Bend during her formative years, told me that the pub was the place to try all their “experimental” beers that they were considering for wider distribution – and so it was in 2010 as well. I had to hit them up for a sampler; here’s what I tried:
Keep an eye out for that BLACK BUTTE XXII because it’s going to knock your socks off your ass. And if you’re in Bend anytime soon, this is one of 7 breweries within the city limits, and easily (and deservedly) the most popular. Go there, and tell them the ‘Jive sent you.
Posted by Jay H. at 4:37 PM